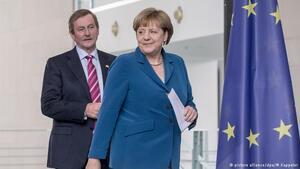 Why in God’s name should a politician elected by Germans dictate the nature of the border between Dunndalk and Newry?

From top: Enda Kenny and Angela Merkel in Berlin yesterday; Economist David McWilliams and his tweet this morning

This morning, economist David McWilliams spoke to Seán O’Rourke on RTÉ Radio One.

They discussed Taoiseach Enda Kenny’s visit to Berlin, to meet German Chancellor Angela Merkel and their talks on the implications of Brexit on the Common Travel Area (CTA) between Ireland and the UK.

Mr Williams explained that while other EU countries should have an interest in Ireland and Britain’s CTA arrangements, they should not have a ‘commanding or a deterministic position on it’ and that Ireland should confidently assert this position.

To make his point he recalled the Dublin Regulation, which was signed in Dublin Castle in 1990, and essentially meant any asylum seeker who arrived from outside the EU had to apply for asylum in the first EU country they reached – placing the biggest burden on Italy and Greece.

Mr Williams suggested that this regulation, in a way, allowed the EU to avoid collective responsibility when it comes to responding to asylum seekers.

The interview opened with Mr O’Rourke asking Mr McWilliams about the tweet he posted this morning (above) concerning Mr Kenny’s meeting with German chancellor Angela Merkel.

Seán O’Rourke: “What prompted you to ask that question?”

David McWilliams: “Well because it struck me, it has struck me over the last six or seven years, Seán that, you know, the whole deal with the European Union that there will be a more European Germany, that’s the essence of the EU, going back to 1957. That Germany would be disciplined and would become a more European country. And, since the crisis of six or seven years ago, what we’re seeing really is what could be described as a German Europe, rather than a European Germany.

And it strikes me as kind of unusual, and a little bit undemocratic that a border between Ireland and Britain, we would have to go over to Germany to seek permission really, in a way as to which way we are going to negotiate. Now I know, the facts on the ground Seán, and we have signed Treaties and this is the implication of that. But it does seem to me a little bit odd that our leader has to go to Germany to seek permission, it seems, or to be given the green light, to have a discussion with Britain on a border between Ireland and Britain in a free labour movement area that has been free, not since 1920 Seán, since about 1420.”

McWilliams: “I remember, even as a kid in the 1980s, at the height of the Troubles, going to the UK and yes, we had to show passports at Hollyhead but there was always a sense that Irish people could vote in Britain, if we lived there for a while, and this sense that somebody else is going to come in and, in a way, set the terms or conditions, particularly somebody who’s voted by a different electorate seems to me a little bit…”

Sean O’Rourke: “Yeah but here’s the point, David. I mean maybe you’re not being entirely fair to the Taoiseach. Because it’s not about looking for permission, it’s looking to build alliances. I mean he has President Hollande coming here next week and, you know perfectly well that under EU rules, we’re not in a position to now to do separate trade deals with the UK, it has to be done by the European Union, of which we are a part. And surely it makes sense, as you would in any political situation, to try to get people on your side?”

McWilliams: “Of course it makes sense to get people on your side but it would seem to me rather illogical and rather apolitical with a capital P, to have a situation where the border between two parts of Ireland needs to be mediated by people in France? I really don’t think this is actually a particularly logical way to go. And nor is it good for the people either on the south side of the border, or the north side of the border.”

“So, again, I suppose what this is exposing are these deep fissures in, these kind of chasms within the EU, where the pooling of sovereignty Seán, which is probably a good idea, OK, leads to complications and incompatibilities when specific issues come up which absolutely pertain to certain countries, over and above.”

“And I’ve always said that it would be illogical for the negotiations between Ireland and Britain, which they will be, to be dictated by the concerns of Poland or Lithuania or Latvia or other countries. And I suppose that goes to the essence of the problems of the EU now. Because, as you get bigger, Seán, you cannot mask over the cracks in a way in which you hope to do so. So, as you get bigger you’re always going to have these regional differences so therefore, for example, the relationship between Russia and Lithuania, which is existential to Lithuanians, is probably of no real consequence to us.”

McWilliams: “They have an interest, no doubt, but they should not have a commanding or a deterministic position on it. And you and I must agree on that, Seán?”

O’Rourke: “This is immigrants now?”

McWilliams: “Precisely. But what it was a way of saying was, geographical certainties and geographical facts are as they are and, therefore, one of the ways in which you deal with immigrants is you’ll actually deal with the place where immigrants first arrive. Ok?”

“So that is a great way of the EU fudging collective responsibility for immigrants, putting it on the shoulders of those who have borders. So there’s a very clear precedent, Seán, you and I know this, for arrangements, consensual arrangements, and ideas that actually take into consideration the facts on the ground which are geographically, we have a border with Northern Ireland which happens, very soon, to be a non-EU country.”

“So, this notion that we are in some way handless going into negotiations and there is no precedents or flexibility and you might call them fudges, I might call them flexibilities are what I would say, logical arrangements, seem to me to be a little bit a) ideological for Eurocratic fanatics and b) illogical for people who deal in the real world of politics. ”

O’Rourke: “So is the answer then to, if you like, dilute the influence and the role of the European Union. I mean like..” 53 thoughts on “Frau And Loathing”