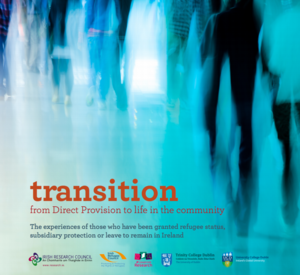 The Transition: From Direct Provision To Life In The Community report, published today

The results of a study looking at the challenges facing former asylum seekers – who lived in direct provision for several years before making the transition to live in the wider community – were published.

It was written by Dr Muireann Ní Raghallaigh, of UCD; Maeve Foreman, of Trinity College Dublin and Maggie Feeley, with assistance from Siphathisiwe Moyo, Gabriel Wenyi Mendes and Clíodhna Bairéad.

The study involved interviews with 22 people who had experience living in Direct Provision – 14 men and eight women, ranging in age from 20 to 45.

They came from Algeria, Angola, Cameroon, DR Congo, Guinea, Iran, Nigeria, Somalia, Sudan, Uganda and Zimbabwe. At the time of interview, 12 had already moved out  of Direct Provision and ten were in the process of trying to make the transition. The shortest time a participant had lived in DP was 11 months; the longest was 11 years.

There were also interviews with people who work with asylum seekers.

Readers will recall how, since 2000, asylum seekers have been living in Direct Provision centres across the country where they generally share a room and are provided with meals.

They are not allowed to work and adults receive an allowance of €19.10 per week, while €15.60 is now given to each child. The allowance for children was €9.60 a week until January of this year.

When a person is notified by the Minister of Justice that they have been granted permission to live and work in Ireland, they usually receive another letter, usually two weeks later, from the Reception Integration Agency – saying they must leave their direct provision centre within two to three weeks.

The study found, upon former asylum seekers getting this protection, the major struggles facing them include knowing what to do next, finding a place to live and getting the money together for a deposit and the first month’s rent – having not being able to work, and save, while in the Direct Provision system.

The authors of the study noted:

Getting access to social welfare and accommodation are interlinked, yet the systems seem to obstruct one another in allowing people to transition from DP into the community. In order to register with the Department of Social Protection to be able to claim Jobseeker’s Allowance or other entitlements, proof of address is required, but the majority of participants were told that the DP hostel was not acceptable as an address.

“In keeping with the research by Crosscare et al, which found that misinformation or ommission of information was a problem for immigrants accessing social protection, in our study people were often not informed of their full entitlements, including Exceptional Needs Payments and the fact that they could get a reduced rate of Jobseeker’s Allowance while in the hostel. Most of the participants continued to receive the minimal DP rate while they attempted to make the transition, although there were a few exceptions, thus suggesting inconsistency in the system.”

…One participant, who was under 25 years of age and in receipt of just €100 unemployment allowance per week, was paying €93 for rent and electricity, which left him with €7 a week for food and other essentials. This was significantly less than he had been getting in the DP system, where he was provided with all his food.

Having been dependent on the DP system for several years, he was now forced to be reliant on food vouchers from the Society of Saint Vincent de Paul, and the kindness of friends. Even when the Rent Supplement came through, the amount of money provided was usually not sufficient to cover the rent, as is often the case for the general population.

…The net result of an inhospitable and often obstructive social welfare system is increased likelihood of cycles of poverty, where people cannot access their entitlements and are forced to borrow while they wait for the state systems to function appropriately.

Meanwhile, the study’s participants said the following, in their own words:

On a sense of futility while living in Direct Provision:

“It’s just like wasting of life, wasting of years. You wake up in the morning. All you have to do is go for your breakfast. Go back to your room, sleep or watch TV. Come for your lunch. Same thing everyday.”

On a lack of autonomy in the centres:

“You have no say. You lose your self-esteem and this is the thing that is needed to build up again, to feel that you belong. I think that is where the problem is, because after so long when you’re being controlled, when you’re being told to do this way. You can’t cook for yourself. You can’t go and buy food. These are all challenges. What do I buy? Where do I buy? What do I need?”

On mental health issues arising out of living in the centres:

“There’s a huge apathy; there’s going to be huge mental health issues and basically nothing to get up for. There is absolutely nothing [for children] they’ve been playing in the corridors. They’ve been playing on the stairs. They’ve got a big huge field right beside them that they’re not allowed into. DP has a detrimental effect on long term children’s mental health. And there are women we are not seeing…”

“It was hard for me as a man. There were just three men in that hostel, with family. Most of them were single men from Africa. Very lovely people and all, very warm and friendly. After two, three years I tried to go out. I got frustrated about the situation. I feel I am going to be mad. Depression.”

On women and poverty:

“The women are very vulnerable to trafficking and prostitution because of income
poverty.”

On getting refugee protection:

“…before I got my papers I was telling my friends, you know, telling them when we’re all talking about it “if I got my papers I would scream. Everybody would not sleep in the hostel and I would be shouting, I would be knocking on everyone’s door” But that day when I got my paper, I was just so quiet. I was so speechless. I was like, “After all these years.” I just sat down and everyone was crying, everyone was screaming, I just sat down, I called my parents at home. My mom, she couldn’t believe me. She was like, “Don’t joke with me.” And I was like, “I’m not joking, why am I joking, this is very serious”, then she screamed.”

“You don’t believe it because you have been expecting for the paper for a long time. Maybe we imagine something big, but it’s just one paper. One letter and the letter can just give you permission. You read and you read again. Repeat reading.”

On knowing what to do next:

“That’s the thing. It’s a surprise. There’s no structure to inform you what you are supposed to do.”

“I’m just finding that it’s difficult because you don’t know anything. We don’t even have a list what to do next really, like even stage number one when you get your papers, you don’t know where to go and collect the form. We don’t totally have that information.”

On the most vulnerable people not knowing what to do:

“It’s a whole spectrum of people with different needs, different abilities. I would say that there is quite a portion of people there that just don’t know how to deal with it because of the institutionalisation and because of the problems they have brought with them. The ones who need help may be the ones you don’t see.”

“I told them [the Direct Provision centre manager] I can’t leave because I have a baby. They said to me you have three weeks, you have time. That’s the answer they give me.”

On trying to find the money for a deposit:

On trying to get a job:

“Job issue in Ireland is hell, that one is another big challenge, hell. They will always favour their Irish citizens before they think of black people, that one is clear and certain. They will prefer to train an Irish person and give the Irish person the job, rather than accepting a person who got their certificate that will offer the person a job.

“October will make me four years into the country, I have never worked. It’s not that I don’t have the experience or I don’t have the certificate, I got the certificate. I’ve given so so many CVs out, so many CVs outside, I have not attended even two interviews. I don’t know I can say it’s something like racist, I cannot say it’s racist, but the issue of getting a job in this country is one of the greatest challenges I face and even after leaving the hostel.”

What Is this? A Centre For Ants?

18 thoughts on “A Life After Direct Provision”