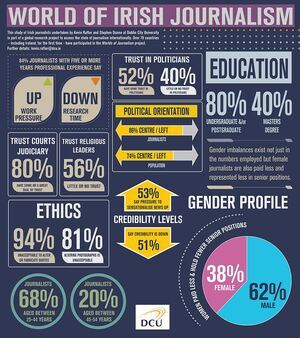 Professor of political communication at Dublin City University, Kevin Rafter and Stephen Dunne have carried out research on Irish journalists as part of the Worlds of Journalism study.

We find two fundamental changes in the age profile of Irish journalists based on a detailed survey questionnaire. First, journalists are relatively young. The overwhelming majority (68 per cent) are in the 25-44 age category. The comparable figure in 1997 was 55 per cent.

Second, we find a ‘”hollowing out” of mid-career journalists – the percentage aged between 45 and 54 is 20 per cent today (33 per cent in 1997). These results are confirmed by numerous examples of experienced reporters who have left journalism for careers elsewhere.

… A young staff can be a positive with energy brought to story generation and an ability to relate news to contemporary life. But there are also negatives.

Given the pivotal role played by the media in “educating and informing” the public about societal issues, there must be concern about the ability of younger journalists to offer serious editorial context when reporting and contextualising major news stories.

Our survey indicates that 62 per cent of Irish journalists are men while 38 per cent are women. This male domination is further emphasised when we examine the seniority of positions held. A near consistent two-to-one male/female ratio is reported at every level of responsibility.

Nor is Irish journalism immune to gender salary disparities. Our findings show that the average post-tax monthly salary for a female journalist is between €2,001 and €2,500.

Their male counterparts report on average post-tax monthly salary levels of between €2,500 and €3,000. It would seem that the principle of “equal pay for equal work” is not evident in Irish journalism.

29 thoughts on “Sexing Up And Hollowing Out”