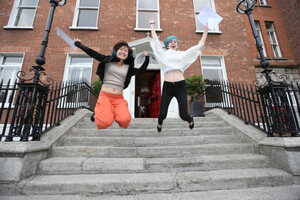 We should be bringing an end to the idea that The Leaving Certificate is an ending to a type of education, or to education itself.

The Leaving Certificate is a peculiarly Irish construction. Our equivalent of the US High School diploma, England’s A levels or France’s Baccalaureate. Its title, its conjugation of the verb ‘to leave’, implies an away with you attitude to those taking part.

At its most benign it’s about the leaving of second level schooling. With this, and because of grade inflation, there is the expectation that this should be followed by third level education.

Once The Leaving was the ticket into the world of work. There are a few opportunities now that are open for our young people at this stage of their life.

For much of the history of this State The Leaving took on a literal definition, as ten of thousands saw it as a rite of passage before leaving the country.

We badly need to look at what The Leaving of today is about. Skills can and should be acquired before The Leaving, and without it. What we used to call ‘trades’ are skills that should be reinstated into the education and training hierarchy.

My What If experience happened when I was 17 years old. I took a civil service exam for the then Department of Post and Telegraphs. The job was called, I think, a Telegraphic Technician. I passed and was offered a job at a very attractive starting wage of 100 punts per week.

I was all on for taking it but the Ma said no. I had to do The Leaving. Had I taken the position I imagine I would have had a less complicated, more secure, though less exciting life. Then again I may have fallen off the top of a pole.

When I was 18 I chose the local Regional Technical College (precursors of today’s Institutes of Technology) over an Arts course. Then you were also required to do a Matriculation exam to gain access to university. The two exams could be combined to produce the best result.

There is something to be said of going back to adapt what we used to do. We should gain access to third level through aptitude tests that better measure skills and knowledge, rather than the ability to regurgitate.

If third level is the ultimate destination, for most, should it be immediate? Informally, over the years, some have adopted the American habit of taking a year out. It isn’t a bad idea. Get the head straight. Learn about life as it actually is. Get a job.

I’m thinking that we should make it a requirement that no one should enter university directly from second level without a 12 month interval.

The real end we should be bringing an end to is this idea that The Leaving is an ending to a type of education, or to education itself. Life long education isn’t something that we should buy into to dip in and out of. It’s an expectation that should be required of all of us.

I was fortunate to be accepted on a Masters programme at University College Cork. I was given a place after my life/work experiences were taken into account over my previous academic endeavours. This practice seems to have only a toehold in Irish academic decision making. It should become an essential part of such decision making.

So, in summary, The Leaving isn’t an end in itself. It isn’t even an end to education. Life is what’s left.