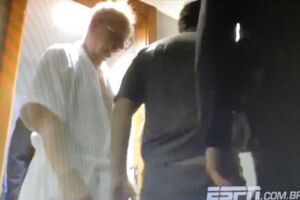 Nobody in Ireland expected someone like Pat Hickey to be subjected to the full rigours of the law.

Sport, it evokes visceral reactions in us no matter what our activity of choice.

Even those with very little interest in organised sports will find themselves caught up in the fervour of national support when the soccer team reaches a major championship or our Rugby lads or lasses smash it in the Six Nations or, as the last few weeks have shown us, our athletes head to the Olympics.

This time we got the full gamut of the human emotional spectrum.

We felt tremendously upset when Katie Taylor lost, not just for our nation’s loss of a medal but also for Katie personally, we jumped with passion and screamed in delight at 2am as Thomas Barr surpassed all expectations in the hurdles; we spewed with anger when we saw that the Michael Conlan judges weren’t in fact wearing balaclavas when they carried out their daylight robbery; we glowed with pride when Annalise Murphy and the O’Donovan brothers took silver in their categories and we felt awe as we attached all of our athletes compete on the international stage.

Then a police officer knocked on Pat Hickey’s door and we felt embarrassment. And shock.

There it was…we’d come through the whole spectrum, a hair-raising rollercoaster of human emotion culminating in a severe drop which left us spinning.

The collective gasps, my own included, which resonated around Ireland on the day Pat Hickey was confronted in his hotel room (or more accurately in the hotel room next to his)  by a seriously unimpressed Rio police force, are testament to our psyche as to how we expect ‘important’ people to be handled by the law.

Here was a man in the nip, hiding in a hotel room next to his while his wife told the police at the door that he’d left the country. It plays like a slapstick sitcom scene yet here was one of the most senior sports officials in Ireland as the main protagonist.

The audacity of the Brazilian police to go and arrest someone so high profile, in such a public fashion, was eye-popping to us here in Ireland who are more used to a scandal being handled by a couple of demure political interviews where there’s a bit of hand-wringing and talk about looking at setting up an inquiry which will deliver a report to be considered by politicians who will once more wring their hands.

Even if it gets to a full Tribunal stage sure no action really comes of it, does it? In essence nobody really expects anyone in as senior a position as Pat Hickey to be subjected to the full rigours of the law the way others beneath him might be.

It’s almost like a form of Stockholm syndrome we are suffering from. We know when things are wrong and we call it out but by and large our expectations have been diminished to the point that we are just happy to see something being recognised rather than actually brought to a satisfactory conclusion.

It’s not because we don’t want to see real repercussions it’s that we’ve been conditioned not to expect them.

It’s why someone who has had the gravest of findings made against him by a Tribunal of Inquiry can proudly strut around the Aviva chatting about his funding of the FAI management team or why the other person also lambasted by the same Tribunal has no qualms about putting his name on a ballot paper – and can have thousands of people vote for him regardless!

This week we watched as Minister Leo Varadkar told us that he believes that anyone availing of State services who dares to criticise them publicly should have their most confidential personal details become fair game in the public sphere.

He believes it so strongly that he wants to bring forward new legislation which would enable him to do it.

You see according to Minister Varadkar these are the real issues we need to concern ourselves with, vulnerable people, reliant on State services, daring to speak out and criticise them, or to have the audacity to try to take a bit of control of their child’s future.

These are the people who need to be intimidated and silenced lest they make a mockery of our State.

Ironically the outlet owned by the same person who had such grave findings made against him by Moriarty, had no hesitation in becoming the Minister’s hatchet for this particular punishment beating on the latest vulnerable person who dared to get a bit uppity about their own life on the margins of society.

If only such dogged ‘reporters’ could give the same tenacity to the Moriarty findings, or the Cregan Inquiry into Siteserv we’d be a lot better served.

While in Rio the Brazilian police get on with the job of policing, our lads have, guess what…yup, they’ve set up an inquiry. Cue hands being wrung and costs to the State accruing rapidly.

Ah yeah, it’s another Irish white-collar investigation. We could win 10 Golds in that category, no doubt.

97 thoughts on “Going For Gold”