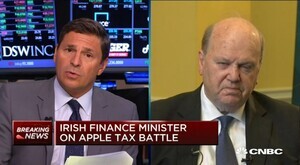 Our most senior finance official can’t see why a company that routes billions upon billions of euros through our country should have a liability regarding that transaction.

I’m going to go right ahead and assume that by now you are aware of the EU Commission’s ruling that Apple owes Ireland Inc. somewhere in the region of €13 billion in tax liabilities based on profits routed through Ireland from sales in other countries in order to avoid tax liabilities.

Basically, as per the ruling: “if you buy an iPhone in Berlin or Rome you contractually buy it from Apples Sales International in Cork.”

In the exceptionally strongly worded ruling from the European Commissioner for Competition, Margrethe Vestager, she stated that “Irish tax rulings to Apple are illegal State aid… with effective taxation as low as 0.005.”

Essentially for every one million euro of profit made in 2014 they paid an effective tax rate of 0.005%...it wasn’t just a sweet deal; it was an overdose of sweet akin to falling into Willy Wonka’s chocolate river.

In the immediate aftermath of the ruling, debate raged across Ireland regarding our treatment of multi-nationals with regards to tax. Many pointed to the jobs apple have created in Cork while others pointed to the loss of €13 billion in tax revenue that we could have had.

It appeared that most people lamented the arrangements but some felt they were justified in the circumstances while others disagreed.

In the middle of it all was the reality of an Ireland that is in hock to Europe for generations to come and a society that has spent the relevant years trying to weather the cruellest of cuts – cuts that have left us in the midst of a housing and homeless crisis, a health service on its knees and a rate of child poverty that continues to rise.

Those very real effects from an economy that should have benefitted from appropriate tax revenues cannot be overstated.

The jobs Apple have created in Ireland are undoubtedly important but so too are the 7 out of every 10 jobs that exist in small and medium companies here in Ireland – many of which were forced to go to the wall during the recession when no sweet deals or any type of reliefs were available to them.

But rather than be outraged or contrite in the face of such a definitive ruling, our Minister for Finance and, by extension, our Government immediately declared the intention to appeal the Commission’s ruling!

Minister Noonan is saying we will spend an unspecified but obviously obscene amount of money fighting the decision that we are owed money from a multi-national firm worth hundreds of billions.

In an interview on the American CNBC outlet yesterday afternoon Minister Noonan said: “On the back of my Apple iPhone it says designed in California and made in China” and therefore he couldn’t see why Ireland would tax it.

The most senior finance official in the country can’t see why a company that routes billions upon billions of euros through our country should have a liability regarding that transaction? Well that’s reassuring, eh?

Though is it really all that surprising? The same man who quite literally rolled out the red carpet and the dancing girls when Donald Trump suggestively cocked an eyebrow in his direction certainly appears to have a fondness for selling ourselves out at the faintest sniff of American influence.

The Minister’s attitude is not entirely different to the Irish Government’s attitude to the US use of Shannon airport (ironically the same airport where Trump’s red carpet welcome happened) for its war efforts in the Middle East: “But shure they’re only using us to route through so we can’t really interfere now can we, and…well, they’re American y’know?”

This laissez-faire, hands-off approach serves no purpose but to perpetuate that old schtick routine whereby we cower in awe of those big important Americans and all the benefits that they can bestow on us lowly auld Irish dimwit cousins.

I’m not denying the existence of many of those very real benefits but we can’t close our eyes and pretend we accrue them without paying very real prices.

The term effective corporation tax rate requires examination. 0.005% may prove effective for Apple but it certainly isn’t in any way effective for us and we cannot continue to kid ourselves that our system is either transparent or fair.

No doubt this is a debate that has only just begun but while we argue back and forth, our Government will commence a legal appeal that will cost us – you and me- a small fortune in order to say we are NOT owed money.

Now if that isn’t a double Irish, I don’t know what is! 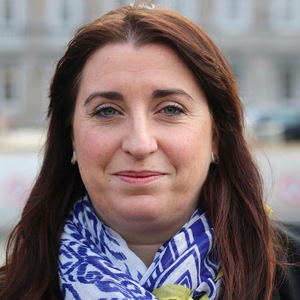