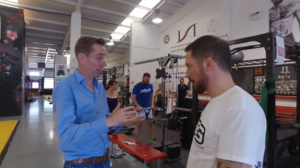 MMA coach John Kavanagh, the man in Conor McGregor’s corner, will chat about the guts and determination that saw himself and The Notorious rise to the very pinnacle of UFC.

Earlier this week, Ryan Tubridy visited John’s Straight Blast Gym in Walkinstown, entered the famed Octagon and got some pointers from the man himself (clip above).

400-metre hurdler Thomas Barr will tell viewers what it feels like to come so angonisingly close and what his prospects are for Tokyo 2020.

Marty Morrissey will share where he got the inspiration for his emotional speech and who he thinks will be taking home the Sam Maguire later this month.

Model and author Alison Canavan will explain how, and why, she beat the booze and what lies ahead now that alcohol is no longer a part of her life.

The Young Offenders Alex Murphy and Chris Walley will chat about starring in the film critics are calling “fall on your face funny”. Mario Rosenstock, Goats Don’t Shave featuring PHAT KiiDZ, The Kilfenora Ceili Band and All Tvvins will also feature.

22 thoughts on “Staying In Tomorrow Night?”