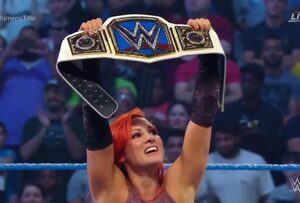 More scenes of Irish success from the world of sports-entertainment last night.

Dubliner Rebecca Quin, formerly of independent promotions NWA Ireland, One Pro Wrestling, Queens of Chaos and more, was of one European wrestling’s brightest prospects before a head injury sustained during a match in Germany necessitated a long hiatus, including missing major independent shows in the US.

Returning to the States in 2011, as an on-screen manager for Shimmer Women’s Wrestling, Quin signed with industry leaders WWE in 2013, becoming Becky Lynch in the process.

After a questionably Oirish on-screen debut for their NXT brand, Lynch settled into the brand’s nascent women’s division, becoming one of its mainstays and embracing her own sci-fi/fantasy fandom in the process.

Heading to the WWE’s main roster in 2015, Lynch has been a massive part of the company’s Ronda Rousey-inspired push for women’s pro wrestling and, in the wake of WWE’s on-screen roster split, has settled into the top women’s role on the SmackDown brand.

Chants of “you deserve it!” greeted Lynch’s in-ring celebrations from the thousands in attendance.