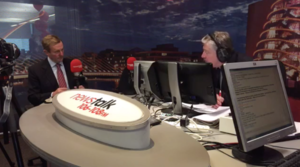 The interview was carried out following reports that Marion Coy, chair of the Collins Institute, is to brief Fine Gael TDs and Senators at the think-in – on foot of a report she carried out about the party’s poor election results.

However, it’s reported, Ms Coy’s report will not be published – to the ire of some party members.

A second, separate report about the election is also to be outlined at the think-in by Fine Gael TD Kate O’Connell.

“I didn’t enjoy the election, I had reflected on this in the summer. As I said, I’ve got my mojo back. We’ve got a huge agenda in front of us and I intend to go flat out as head of a partnership Government which is very different.”

“I just didn’t enjoy it [the election]...I always enjoy elections, meeting people out and about, the arguments, the rows indeed and the discussions that take place. A peculiar time, obviously, changes that have occurred all over Europe reflected themselves here in Ireland.”

“The people made their choice, we respect that. We put together a partnership government, obviously two Independent ministers at Government, third with the Independent Alliance and supported by the Fianna Fáil party in opposition…”

In relation to the two reports…

Pat Kenny: “What about the two reports; Kate O’Connell’s report and the academic report on why you lost so badly in the election?”

Enda Kenny: “Well, some very good recommendations there looking at the future…”

Pat Kenny: “Are you going to publish everything?”

Enda Kenny: “Well, obviously, when we bring the report to the Executive Council who represents the entire spectrum of the party, we will publish them, yeah.”

Pat Kenny: “You will publish these reports? Because there has been a demand from backbenchers and…”

Enda Kenny: “The reports are a series of recommendations that I think are based from the politicians, in the very practical sense, to Marion Coy’s report which is a more academic work but which I think has really strong values set into it that I think will improve the lot of the party in communicating in dealing with a range of outside interests, in dealing with getting Fine Gael back to being a campaigning party on issues that really matter to people.”