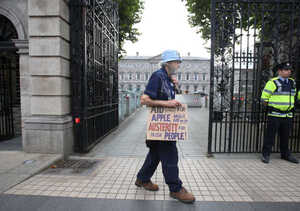 Ireland could be stuck in a reputational and diplomatic damage-zone for years.

There has been so much written about the Apple tax ruling. Here I look at some of the longer-term implications.

But let’s first nail down some confusions and misunderstandings.

First, the ruling is not an attack on Ireland’s 12.5 percent tax rate. As Peter Brennan of EPS Consulting stated:

Second, this is not a tax ruling as such. According to Professor Edward Kleinbard:

‘”The heart of the case is simply that Ireland gave Apple hidden subsidies in exchange for jobs. The only tax connection is that Ireland harnessed its tax system as the instrument to deliver these subsidies. Imagine Dublin promised Apple €220,000 in cash annually for every job located in Ireland.

At 6,000 or so jobs, this totals about €13bn over 10 years. This would clearly equate to an instance of state aid . . . The commission concluded that this is the deal Ireland agreed — but, instead of collecting tax at the Irish 12.5 per cent tax rate and writing cheques to Apple, Ireland forgave substantially all of Apple’s Irish statutory tax liability.”

Nor is it about large nations ganging up on small nations. Before Apple, the largest EU ruling on illegal state aid delivered through the tax system was against France and the French EDF company.

This is about illegal state aids – something that has been part of the EU since the 1951European Coal and Steel Community treaty.

While there have been great memes on social media about what Ireland could do with the €13.5 billion, we shouldn’t get carried away.

While these are legitimate metaphors, Ireland is unlikely to receive this full amount. As Professor James Stewart observes:

How much could Ireland hope to get? This is speculative at this stage. People who have a much greater grasp of these esoteric international tax rules than me have stated the final figure could be as low as €2 billion but maybe €5 billion. Or maybe more. Or possibly less. Nonetheless, this could be a boon for infrastructural investment.

Nor is it the case that the government is in full control over this ruling.

Apple has announced it will appeal and this process could take years. So instead of a neat situation whereby Ireland would receive €13.5 billion if the Government accepted the ruling, the reality is that we are likely to receive much less and – even if the Government didn’t appeal – we will have to wait years on Apple’s appeal (and may end up with nothing if the appeal is upheld by the European courts).

The Government’s decision to appeal can be partly explained by the fear of two queues forming at their doorstep. The first queue concerns the ruling itself.

As the EU Commission states:

‘The amount of unpaid taxes to be recovered by the Irish authorities would be reduced if other countries were to require Apple to pay more taxes on the profits recorded by Apple Sales International and Apple Operations Europe for this period.’

It is already beginning – with Spain, Austria, Italy and France beginning to investigate what is due to them from the Apple profits. Just what any Government needs – negotiating with other countries, possibly going to court, all that snooping around our tax affairs.

The second queue may form if the EU Commission is investigating other companies potentially benefiting from illegal state aid.

It is being widely reported that the EU Commission is investigating six more cases of Irish deals with multi-national companies. And a Reuters investigation in 2013 showed that at least 74 percent of the 50 biggest U.S. technology companies, including Google and Facebook, use practices similar to Apple’s to reduce their tax bills (these are not all Irish based). So Apple may only be the beginning.

If either or both these queues start forming, Ireland could be stuck in a reputational and diplomatic damage-zone for some years.

The Dáil debate last week was conducted in the dark. TDs did not have access to the 150-page ruling (it will be published after the Government, Apple and the EU Commission agree on redactions for commercially-sensitive information – this could take months).

Therefore, it could not independently assess the ruling nor could it assess the likelihood of a successful Government appeal.

‘Last year, the European Commission published a list of six tax rulings and 59 “measures similar in nature or effect” since 1991, which it had challenged on the basis of state aid rules. It was successful in almost all cases.’

The EU Commission has a high success rate in fighting off appeals in the European Court. The Government may know its chances are slim and are undertaking the appeal in an attempt to buy time.

What is the long-term impact of the Apple ruling on Ireland’s low-tax FDI strategy?

Technically, it could be very little. After all, the EU Commission ruling is not about tax policy; it’s about illegal state aid. And the tax provisions through which those subsidies were delivered no longer exist. In this respect, the Apple case is historical.

However, if the state were found to have made special deals with other companies this could give Ireland the image of operating an ad hoc legal and tax framework – one which business and just about everyone else would have little confidence in. That could be quite damaging.

But the biggest challenge for Ireland is that the Apple and related decisions will accelerate moves towards greater European tax cooperation and coordination.

Though hardly mentioned in Ireland, only weeks before the Apple ruling the European Parliament overwhelming passed a resolution containing a number of progressive measures to fight multi-national tax avoidance and evasion (the full text of the resolution can be found here):

EU register of beneficial owners of companies, and a global register of all assets held by individuals, companies and entities, such as trusts and foundations, to which tax authorities would have full access.

A tax havens blacklist with stronger sanctions against non-cooperative tax jurisdictions,
Action against abuse of “patent box” regimes and stricter definitions of what is allowed under transfer-pricing

An EU-wide withholding tax, to be collected by member states, to ensure that profits made in the EU are taxed at least once before leaving it

Measures like these are necessary to advance corporate accountability and tax justice throughout Europe. However, Ireland continues to resist.

While this resolution found support across the political divide in the European Parliament (514 voted for, 68 against with 125 abstentions) among the Irish MEPs only Nessa Childers supported the measure; the rest opposed or abstained.

One lesson we can draw from the Apple ruling is that the only agency that can break the tax-avoidance/evasion strategies of multi-national capital is a supra-national one; in this instance, the EU. Would a single nation-state (never mind a small one) have been capable of making this ruling and making it stick? Extremely doubtful.

There is a fear that a rational, democratic and accountable corporate tax regime in Europe will undermine Ireland’s ability to incentivise foreign direct investment (FDI).

It is legitimate to ask whether Apple would have sited thousands of jobs here without the ‘tax-deal’. But such questions should not lead us into apologies for global tax avoidance, never mind our participation in it.

In the first instance, the Dáil should assert is role in this process even with the Government appealing.

The Public Accounts Committee or a special committee should hold hearings on the ruling itself, clarify the issues, assess the likelihood of a successful Government appeal and the potential for further cases down the line – in both Ireland throughout Europe.

This is supposed to be the era of ‘new politics’ with a heightened parliamentary role. Well, let’s heighten it.

But these questions should also lead us into a more profound, evidence-based debate on our future in the international marketplace and the policies to incentivise foreign investment.

That debate should start from this simple premise – what is good for FDI is also good for the Irish people: a modern infrastructure, investment in education, a culturally-diverse society, affordable housing costs, comprehensive public transport and accessible cities, strong public services (low-cost, high quality childcare) and social security (health and in-work income supports), transparent governance, recreation and leisure activities, economy-wide employee innovation and participation and so on.

And tax policy? One that supports investment, investment and more investment.

We can do this. Or we can continue to participate in a global race-to-the-bottom; and even worse. We can – just as we did during the speculative-fuelled boom years prior to the crash – continue to close our eyes to the reality around us

And hope the world doesn’t notice us.

12 thoughts on “Apple Is Only The Beginning”