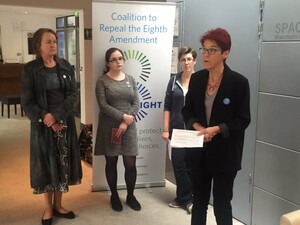 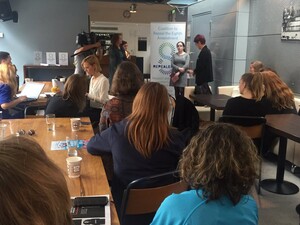 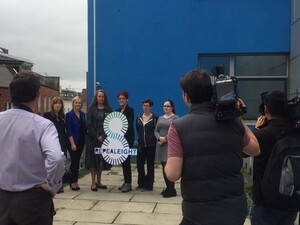 At the Project Arts Centre in Temple Bar, Dublin.

The launch of the Coalition to Repeal the Eighth Amendment, at which convener of the coalition Ailbhe Smyth (speaking in the top pic) said:

The interesting thing about this whole movement, I think, is that it’s, it has a hugely positive spirit. This is not the old, depressing, melancholic kind of campaign that we had to undertake in 1983, in 1982, in 2002 – this is so much more positive, and so much more upbeat. There’s a great sense of determination…”

“I think we do know, and I think Ireland, as a whole, recognises that the sham has to stop. We have to stop pretending that abortion isn’t a reality for women in this country. Yes it is. And we need to take account of that and provide for it in an appropriate way. And, really, the time for hiding is definitely over. It’s time now to right the awful wrong that has been done  to women for so long and put our house in order.

“So, we’re calling on Government to take its courage in its hands and to move quickly now; to right this dreadful wrong.”

Pics via Martina Quinn and Alice PR and Events