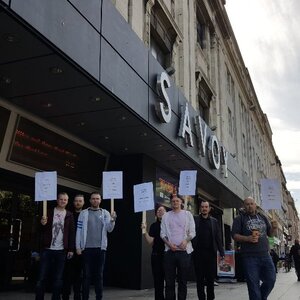 Staff of the IMC Savoy Cinema protesting outside the cinema

IMC, the owner of the Savoy cinema on Dublin’s O’Connell Street, saw profits increase to just under €8 million last year.

Newly filed abridged accounts for Irish Multiplex Cinemas Limited, which operates 16 cinemas in the Republic and a further three in Northern Ireland, shows accumulated profit rising to €7.99 million for the 12 months ending October 31st, 2015. This compares with a profit of €7.23 million a year earlier. The firm’s directors are Paul Ward and Carol O’Riordan.

IMC, which has more than 130 screens, owns and runs the Savoy, the cinema of choice for film premieres in the Republic. It was also the owner of the Screen on D’Olier Street, which closed earlier this year.

…According to the latest accounts for IMC, shareholders’ funds rose from €9.5 million to €10.2 million during the year under review while cash at hand rose to €2.7 million from €1.9 million.

Staff costs, including directors’ salaries, totalled €811,708, down from €903,573. The group employed 42 people across operations and administration, down from 44 in the preceding year.

We, the staff at the IMC Savoy Cinema, are currently in dispute with our employers IMC Cinemas over a number of outstanding issues.

In the following, [we] will list chronologically these numerous grievances starting with the closure of the IMC Screen – a move that much saddened staff and patrons, and the staff there have our utmost respect.

January 2016: The staff of the Screen Cinema received letters announcing the closure of the Screen. One staff member is offered redundancy, the other was told “she would retire”.

This staff member questioned this and redundancy was then taken off the table and left to be reviewed at a later date. Both staff would be ‘redeployed’ to the IMC Savoy on the basis the jobs would be like for like. They are not like for like.

Different turnover, different shifts, and more demanding of the staff physically. There are a lot more differences. IMC have not honoured this agreement.

March 2016: The IMC Screen staff start in the IMC Savoy. Their full-time hours resulted in IMC Savoy staff losing the regular hours they had kept.

March (Easter) 2016: Staff agreed to work Holy Thursday and Good Friday for the opening of Batman V Superman, days during which the cinema is normally closed.

There is an agreed overtime wage that was not honoured and changed without notice of change. Some staff were not paid the full overtime and, to our amazement, our payslips showed the overtime was paid from a day of statutory holiday pay.

Basically losing a day’s holidays for a working day. Unbelieving this was the case, staff questioned it, only to be informed this was not a mistake. This matter needs to be rectified.

April 2016: Savoy have many morning shows for Disney/Warner Bros/Universal, usually a premier show early Saturday/Sunday mornings. As long as I’ve worked them there is an agreed rate, that’s 10 years.

Staff agreed to work such a show on a Sunday in April and discovered in their pay that the agreed rate was not paid. There was no notice given of change. May I just state at this point, basic employment law requires a full month’s notice – in writing – to any changes.

After much protest IMC conceded and subsequently paid the withheld pay. When questioned on why this happened, the answer was the company could not afford to pay that rate. They said for this reason they would not be having anymore. Pretty much saying it’s our fault.

May 2016: The director of IMC holds a meeting with four full-time ushers stating their job will be made redundant in favor of automation. They were told they would not need to work their notice and could leave immediately.

At a meeting between the company and SIPTU the following week, these redundancies were questioned. The meeting raised a lot more questions. There were no plans in place for automation, the question of the security of patrons, staff and building which the usher supplies was not to satisfaction and the elephant in the room…making four compulsory redundancies where there are two voluntary.

There is a refusal for negotiation on these issues from the company. For five months now, the staff have been left in a state of uncertainty about their futures with no job security there for them whatsoever.

During this meeting the directors changed their stance to the statement that redundancies are a cost-saving measure. One threat that was made was the director stating “You don’t want the Savoy to go the way of Clerys, do you?”.

June 2016: An usher left 18 months ago and his position was not filled. Two employees, both experienced in the role, one previously an usher in the Savoy for five years, filled some of these shifts on average two shifts a week.

They have always filled in for many years to cover holidays and sickness. There is an agreement these employees receive the usher rate. In June, after receiving their payslip, they discovered the agreement was not honoured with not notice of change.

The staff worked under protest at this for three weeks and still received the minimum rate. Coming in for a shift, as usual, one Friday they were told they would not be needed and sent to different departments.

To all the staff’s amazement, they were replaced by outside staff from a private agency. For the lesser cost of putting on two experienced workers, the company brought in a private firm.

The staff are very aggrieved and will be pursuing withheld pay and a return to their position. A massive frustration is these two staff still have to pick up the slack from the ever-changing private company employees who do not, nor have been trained in the role and usher procedures.

Our position is clear: IMC must come to the table and discuss these issues, deal with the plan they put in motion for the redundancies. If not, things must return to the status quo. The staff want this resolved and are open to all negotiations.

Our campaign will continue until such a time as IMC see fit to talk to us.

33 thoughts on “Meanwhile, Close To Clerys”