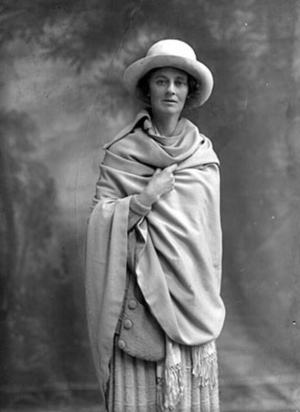 On October 2, ten female sound artists will converge on Richmond Barracks in Dublin, where 77 women were remanded for their involvement in the 1916 Rising.

Mean Time is  a collaborative improv project marking the end of Dublin Mean Time, as strenously objected to by Countess Markiewicz.

In recently-discovered correspondence with London-Irish solictor JH McDonnell, Markiewicz saw the change, cited for reasons of railway building and telegraphy as yet another sign of British colonisation, of “public feeling… outraged by forcing of English time on us”

Up until the 1st of October 1916 Ireland was on Dublin Mean Time which was 25 minutes and 21 seconds behind Greenwich Mean Time.

(The artists) will perform a unique improvisation based on especially commissioned pieces on the theme of these lost 25 minutes for the anniversary of the abolition of Dublin Mean Time.

A lineup you can set your watch to.

We’ll get our shawl.

Constant Markievicz: His Life And Times