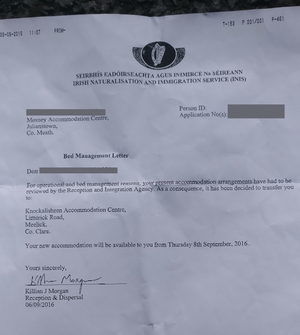 Further to the story of Direct Provision resident “Jane”, whose case was aired on RTÉ Radio One’s Liveline yesterday.

Jane who, after asking for more food while breastfeeding her three-month-old child,, was evicted from Mosney, given two days’ notice to move accommodation in a “bed management” letter (above)  that made no mention of her two children.

The Reception and Intergration Agency (RIA) does not outline any specific rationale, or detail any of the particulars why ‘accommodation arrangements’ needed to be reviewed in the first place. Nor does it outline what the process of review involved. Its a defacto decree with no means to official appeal.

It begs the question why was Jane was not given ANY information that might offer ANY grounds for understanding the basis of RIA intended eviction?

It might be dressed up in a sterile language less damaging to the sensitivities of Killian and other RIA bureaucrats. Who would lose sleep writing letters to evict people seeking refuge in Ireland were its just about “bed management”?

Yet it remains unmistakeable. What we are reading – and what this letter is – is the exercise of arbitrary power over a family without the slightest attempt of providing any meaningful justification. It is the text book definition of authoritarianism.

Meanwhile, this incident is merely the tip of the iceberg…

Former workers employed in direct provision centre spoke about persistent system degrading treatment on a daily basis. Of making people queue and beg for rationed toilet rolls. Of other employees refusing to give toiletries to individual adults, arguing one bottle of shower gel between three people in a room is sufficient.

Petty violence after petty violence, micro aggressions from management and employees as a tool of social control against people denied the basic anatomy to work for themselves and their families. Processes which cause genuine emotional tramas, depression and in some cases suicide.

Heads Up Everyone: Here Comes The 1%