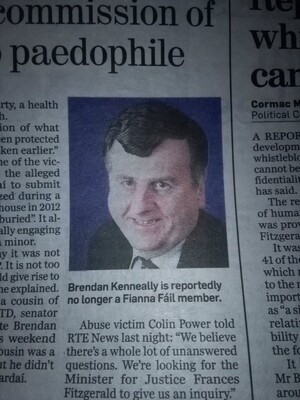 You may recall a post yesterday by Saoirse McGarrigle about the victims of paedophile Bill Kenneally – an accountant from a well-known Fianna Fáil family and basketball coach in Waterford – who want a Commission of Investigation.

Kenneally was convicted earlier this year, after victim Jason Clancy came forward in 2012, but Gardaí knew about the abuse as far back as 1985.

Kenneally’s uncle was the late TD Bill Kenneally, who died in 2009, and who was succeeded by his son Brendan Kenneally.

Brendan Kenneally was told about the abuse by a Waterford woman in 2002 but he didn’t tell gardai. Instead, he spoke to another uncle and local priest – and current chairman of the board of management at Holy Cross National School in Tramore, Co Waterford – Monsignor John Shine –  and arranged counselling for Bill Kenneally.

Brendan Kenneally did not report the matter to the gardaí.

The article by Ms McGarrigle, a broadcast journalist with South East Radio, followed a piece in the Sunday Independent by Damien Tiernan, of RTE.

Further to this, the Irish Independent yesterday ran a story about Kenneally’s victims calling for a commission of investigation with a double byline containing the names Conor Feehan and Saoirse McGarrigle – even though the newspaper didn’t print the copy McGarrigle submitted.

In addition, the article included a picture of Brendan Kenneally with the caption:

“Brendan Kenneally is reportedly no longer a Fianna Fáil member.”

Brendan Kenneally is still a member of Fianna Fáil – in fact he’s Hon Sec of the Thomas Clarke Cumann. 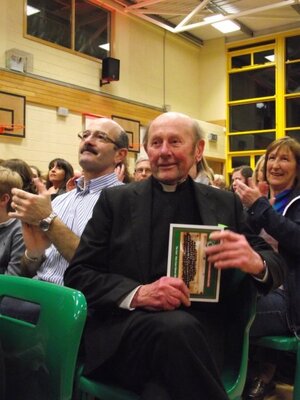 Victims of paedophile Bill Kenneally are calling for a parish priest to resign as chair of a primary school board of management.

Monsignor John Shine is an uncle of Bill Kenneally and heads up the Holy Cross National School in Tramore, Co Waterford.

…Holy Cross principal John Kindlon said he could not comment on the situation as he is directly employed by the board of management which is chaired by Monsignor Shine.

Contacted by this newspaper the priest refused to discuss the issue.