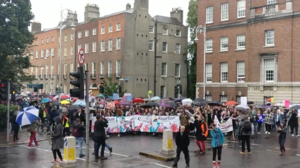 At the Rise and Repeal march in Dublin.

By Mark Malone, who sez:

Here’s a wee edit of Saturday’s abortions rights march as it rounded the corner at Merrion Square. I filmed for close to an hour and a half as tens of thousands of people passed. Here’s what it looks like sped up into three minutes…