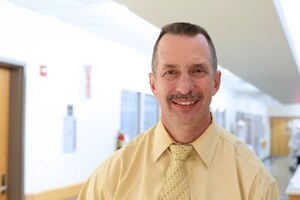 Dr Martin McCaffrey, a Professor of Pediatrics at University of North Carolina and a neonatologist

On The Pat Kenny Show on Newstalk.

Then, just before the interview took place – in the second part of the show – Mr Kenny introduced the doctor by saying this:

“A professor of neonatal perinatal medicine is urging medical professions and politicians here to reconsider how we treat babies with chromosomal abnormalities. Dr Martin McCaffrey is a neonatologist visiting from the University of North Carolina to address Stormont about the issue and he’s with us in studio. Dr Martin McCaffrey you’re welcome to the programme.”

Pat Kenny: “What kind of outcomes? If a baby is diagnosed with these conditions in the womb, is termination often the outcome?”

Martin McCaffrey: “Correct, so what has been seen is that if you have a pre-natal diagnosis,  before birth diagnosis, and if you have a post-natal diagnosis, the children who are diagnosed pre-natally are often given a message from providers, for a variety of reasons I believe, that is fairly hopeless and fairly dismal and many of those pregnancies will end in termination. Some will not, but many will. After birth, if a baby is undiagnosed but not diagnosed until after the delivery what will happen is that five or six or seven days of age a baby is diagnosed. A baby has already had resuscitation procedures, support procedures initiated. So that diagnosis may be given, it is still a challenging diagnosis for families. But families have seen that their child is actually alive and living and actually that is the case with most of these children when they’re born. They do not die at birth and they will survive, we know now, for fairly significant periods.”

McCaffrey: “I think, typically now, for a variety of reasons, Pat, I was trained and until 2009, I will mark that as my epiphany, I was trained that these children didn’t survive and they all died. In 2009, I went to a meeting where I met a number of parents of these children, I didn’t realise any of them survived. And it was news to me and I started looking at the literature and the literature is clear over the years that maybe as many as 20 or 30% of these children, or 40%, survive to a year.

That 20/30% can survive to five years. And I was absolutely puzzled by this. That this was not how I was trained. I think for a variety of reasons we, as medical providers across the board have been a little bit reluctant to accept that these children can live. Not because they can’t live physiologically but because they have severe developmental handicaps and I think it’s really more of an issue of us not being willing to embrace the vulnerability and the opportunity, the virtue of dependence, that really exists with these children. We all, Pat, are going to leave this life at some point. We are all lethal, we are all temporarily abled and, at some point, we are all going to leave, and I think these children, if we would open up our eyes as providers, we would be able to find the love to support them, it would build a community that would flourish.”

“Yesterday Newstalk’s Pat Kenny interviewed an American doctor [Dr Martin McCaffrey] on the subject of chronosomal disorders, particularly 13 and 18. To listen to him, you would think that trisomies were nothing to be worrying about, instead of extreme life-limiting conditions.”

“It turns out this doctor is a pro-life lobbyist with a Catholic group called Be Not Afraid. This affiliation was not made clear in the broadcast. The doctor was merely introduced as neonatologist, Martin McCaffrey – no mention of his pro-life affiliation whatsoever. The doctor was presented as a neutral authority on the matter.”

“This broadcast was brought to my attention by someone listening to the show who lost her 9-week-old baby daughter to Trisomy 18 and was extremely upset by this.”

‘Thank you for getting in touch with Newstalk. We greatly value you as a listener to The Pat Kenny show.

I would like to assure you that we have given your complaint much consideration.
We feature items involving the pro – life and pro – choice positions regularly. We do not necessarily feature both sides on the same day.

Dr McCafferty made it clear that he was taking part in the programme in his capacity as a neonatologist, and Clinical Professor in Neonatal-Perinatal Medicine at University of North Carolina Chapel Hill and as a board member of the International Trisomy Alliance.

Pat also challenged Dr McCaffery on weather his personal opinion is informing his medical opinion.Pat read many texts throughout the programme putting the pro – choice position to the audience.

Again we greatly appreciate you getting in touch with the programme and we hope that you continue to listen to Newstalk.’

Email from  The Pat Kenny Show to a Newstalk listening ‘sheet reader this afternoon.

Can You Move A Dial?

83 thoughts on “Be Not Afraid”