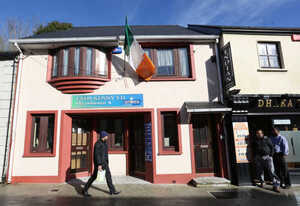 A woman has been arrested following an incident at the Taoiseach’s constituency office in Castlebar, Co Mayo.

The woman, who is believed to have been protesting about the situation in Syria, daubed red paint on the building which is situated on Tucker Street in the town centre.

The Taoiseach was not in the building at the time.

18 thoughts on “Meanwhile, In Mayo”