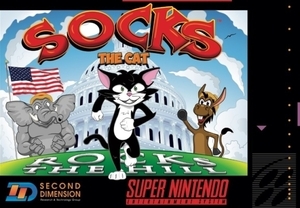 In  the late ’90s, when the SNES ruled the world and Bill and Hillary lived at the White House, Japanese publishing house Kaneko commissioned a side-scroller for the US market, based on the exploits of Socks – the First Cat incumbent.

Taking potshots at political figures across the spectrum, Socks the Cat Rocks The Hill was well received but short-lived. Just before the game’s release, Kaneko closed its US operation, leaving developers in the lurch and the game relegated to YouTube clips and forum discussions.

Now, with Hillary destined for the White House and Clintonesque in-jokes more relevant than ever, the developers have apparently regained the rights.

Currently past the $15,000 mark on Kickstarter, the idea is to finish and reissue the game for modern systems. The funding deadline closes on November 8th.

Will We Finally Get To Play Socks The Cat (Retro Gamer)

A Game About Nothing

The Pentagram Of Boardgames