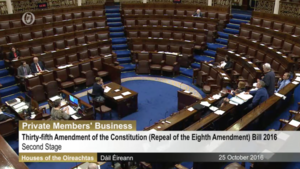 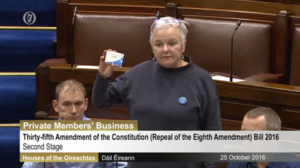 The Dáil is debating the Anti-Austerity Alliance-People Before Profit bill to repeal the 8th amendment.

During the debate, People Before Profit TD Bríd Smith held up abortion bills to highlight the hypocrisy of Ireland’s laws.

“I’m stunned by the presence of those who think it’s so important for half the population that they’ve turned up and bothered to stay for this debate. We’ll see, as the evening progresses, how many of them stay away and how many of them turn up. But my guess is that it’s shame and mortification on U-turns that’s keeping most of them away and mortification on being called out on their own hypocrisy. And mortification and shame on the question of how women in this country have been treated and remain to be treated.”

“And I just quote one of them, known to this house, a woman called Amanda Mellet, who suffered from fatal foetal abnormality, and whom the UN human rights committee really attacked the Sate and this country, for cruel, inhumane, degrading treatment and discrimination, in violation of article 7 and 26 of the International Covenant on Civil and Political Rights and, just to quote Amanda, ‘I still suffer from complicated grief and unresolved trauma, not from the termination but from the way I was forced to have it’.”

“I hope the day will soon come when women in Ireland will be able to access the health services they need in their own country where we can be with our loved ones, with our medical team and where we have our own familiar bed to go home and cry in. Subjecting women to so much additional pain and trauma must not continue. And I’m telling you, on that side of the house tonight, that’s exactly what you’re doing – with your tricks and your obfuscation and your twisting to push this bill down the road by a year.”

“You are forcing more Amanda Mellets to more pain and more trauma and I hope that’s as far as it goes because if there’s another Savita Halappanavar within the next year, then you’ll have to think long and hard about your position. We have a historical opportunity, for the first time in 33 years, to rid this country, and particularly women of this country, of literally a chain around their ovaries and their bodies and their lives. That amendment was put in to the constitution when I was a young woman, along with you Finian, Deputy McGrath, we were out campaigning against it.

“We now have a historical opportunity to undo that, and why? Because we have those young people [points to the public gallery], we have those young woman who weren’t even born when that amendment was inserted into the constitution. And they want the right to be able to say how they live their lives, how they control their bodies, what this government has to say to them. They never had a vote on whether that amendment should stay in the constitution or not and your amendment to our bill tonight, to kick it down the road at least one whole year, means that they probably won’t get that chance in the lifetime of this government, if the government lasts that time. And you’ve just guaranteed that to them.”

“Let me just quote to you: figures from very important research by important medical journals. A quarter of a million women have left this country, north and south, between the years of 1970 and 2015. Today, about 10 women a day leave this country to procure abortions and, five years on, the Women on Waves estimate that there are about 5,600 women have contacted them to get the abortion pill.”

“But the legacy of the 1980s, when Anne Lovett died giving birth, a 15-year-old giving birth in a graveyard in Longford, and the legacy of Savita Halappanavar and the legacy of Ms X, Ms Y and a whole plethora of pain and suffering that was brought on women in this country cannot continue. And if these women upstairs represent anything in this country, it will not continue. Because, despite your obfuscation and kicking to touch, this fight goes on. And this campaign to repeal the 8th amendment will not stop and you will get your answer on the street. You keep talking about the ‘centre will hold’, well they are the centre and they won’t hold your plan together for you, to continue the barbarism and the low moral values of the 1980s. You cannot tell them that you are the boss of them. It won’t be allowed continue.

“I want to make a few simple points about this wonderful Citizens’ Assembly that you guys and the Taoiseach came up with, in order to avoid really dealing with the question of women having control and having a say over their own lives. First of all, think about it: A Red C poll company, a well-off polling company based here in Dublin but also based internationally chooses 99 citizens to sit down and talk about, along with professionals from the legal and the medical profession, to talk about what’s good for women. What’s good for women? What’s good for me? Do I decide whether I can have a right to terminate a pregnancy? Or do 99 citizens and a doctor and a lawyer and a judge make that decision?”

“So, the so-called Citizens’ Assembly, with jolly TV, with a budget of €2billion with Q4P4 to do the publicity with Beatrice.ie to email, this wonderful Citizens’ Assembly is going to tell the vast majority of us how we should live and what we should think.”

“I remember marching, when the X case was imprisoned against her will, by this State, demanding, with a sheet of paper, alongside tens of thousands of young girls who burst out of their schools, pushing aside their principals and the nuns, and came down to this house, at the Taoiseach’s end of it, day after day after day to demand: ‘let her go’. When it culminated in a big demonstration of tens of thousands on the streets, lo and behold, the Supreme Court changes its mind, so there you go, the independence of the judiciary versus the will of the people and it will be the will of the people that forces this house to make a decision and stop kicking it down the road the way it did with water charges, with the Nama legislation, with every other piece of challenging issue that came before you, kick it down the road and hope it doesn’t come back, you’re not going to do that with women and with women’s lives.”

“It took 21 years for this house to legislate on the basis of the referendum that took place after the X case. 21 years: what a bunch of cowards. And the same bunch of cowards have absented themselves tonight from this house. Tens of thousands marched when Savita Halappanavar tragically lost her life. Tens of thousands marched when  a bus strike was on and it lashed rain a few weeks ago and the demand was simple: we want to vote, we want to repeal the 8th amendment.”

“Finally, I just want to illustrate more hypocrisy from people in this house, from the morality of the church, from the State in this country. The utter hypocrisy of close your eyes, close your ears, close your mouth, like the three monkeys and pretend it’s not happening. Abortion in this country is a reality, it has been a reality forever. And it will remain a reality. And, tragically, what will also remain a reality, are the serious cases like Savita, like Ms X, like Ms Y. And we have to ensure, and we really do have an opportunity and a duty now to ensure that you don’t get away with it, that you fight continues.”

“This is the abortion pill. And this pill is very simple and very simple to obtain. You get it on the Women on Web, you get it over the internet. And loads of young women up there are doing that  – for a number of reasons: because it’s very safe, the World Health Organisation has tried and tried again and has said it is safe, it is affordable and you can get it here in this state.”

“You can also get 14 years for procuring it, for taking it and for helping yourself to have an abortion at home. And I think that, probably, if they put their hands up, a load of them, that you could arrest them and fill two wings of Mountjoy [Prison] with. You could arrest me for having it and give me 14 years but you ain’t going to do it because what’s on your books and what’s in your laws, you know that if you dare to implement it, you would hell, fire and brimstone down on top of this house and in wider society. Cause we’ve moved on, we’ve moved on, we’re away from the 1980s, away from the Dark Ages and we ain’t going back there. And this will continue and you will continue to deny that abortion is already a reality in this country and it will be for tens of thousands of women.”

“I have to say that I was extraordinarily angry with the Independents in particular, in the Government and the measures they took today to kick for touch on this. But my anger is nothing compared to the anger that was felt outside at a relatively decent-sized demonstration at half past five this evening. Young women are furious with you. They’re furious with Katherine Zappone who mainly got elected on the basis of marriage equality, repeal the 8th, all of the good liberal, free-thinking things that people to get in. They’re furious with you Finian McGrath, they’re furious with John Halligan and they’re furious with every single one of the TDs and Senators who committed to repealing the 8th amendment in advance of the election, are you going to do what Pat Rabbitte did? ‘You make promises just to get elected’ and then you don’t implement them?”

“Well, if you keep nodding your head, you’ll probably be nodding your head for another year because if the case is that the so-called 99 wise men and women will come back and tell me what to do with my life, by the end of next June, they’ll already have witnessed at least 3,000 women being exited from this country in order to procure an abortion and more tens of thousands of women in the likely future, procuring this simple pill.”

“At least the pill is affordable. For many women, including those in direct provision, they don’t even have the option to leave the country. Many women don’t have the money, they don’t have the support at home, they can’t get time off their job, they can’t get a childminder. Rich women can do it. Working-class and poor women can’t and, disgracefully, we have imprisoned hundreds of women in direct provision centres who have no right to leave this country and return to it.”