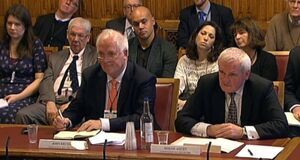 From top: Former taoisgh Bertie Ahern and John Bruton at the House of Lords; Derek Mooney

The provisions of the British Irish Agreement are not something that the pro-Brexit DUP or anyone else can wish away.

Like about 98% of the adult population I rarely, if ever, watch RTÉ’s European Parliament Report. While this has more to do with the ungodly hour at which it is scheduled, rather than any lack of interest in what our MEPs might be up to, last night was an exception.

By chance, I happened to catch the first half of last night… actually it was this morning’s programme… which included a short discussion on the impact of Brexit on Ireland.

On the panel were three Irish MEPs. Two from this side of the border: Sinn Féin’s Liadh Ní Riada and Fine Gael’s Mairead McGuinness and one from the other side of it, the DUP’s Dianne Dodds.

Though the discussion was interesting enough in itself, with both Ní Riada and McGuinness arguing their case well, its real value was the insight that Mrs Dodds feisty contributions gave us into the DUP’s Brexit mindset.

Her comments and the thinking underpinning them allow us to see where the Northern Ireland First Minister is coming from and may even assist in interpreting [First Minister] Arlene Foster’s recent DUP conference address.

When the two MEPS from this side of the border reminded Mrs Dodds that over 56% of voters in the North had chosen to remain in the EU she countered, as many DUP and pro Brexit unionists do, that the North is part of the UK and must be bound by a UK wide vote.

The presenter Tony Connolly followed up on this point, referring to the majority consent provisions of the Good Friday Agreement.

She is correct on her party’s historic opposition, however her belief – and doubtless the belief of many of her DUP colleagues – that they somehow are not committed and bound by the Good Friday/Belfast Agreement is based on a false premise of their own construction.

They ignore the deeply inconvenient fact that the Agreement was passed by 71:29 by Northern Ireland voters on a massive 81% turnout and that other agreements, which Mrs Dodds cited, that the DUP have since signed up to since are predicated on that Agreement.

They also omit a very significant aspect of the Agreement, one which many of us down here also forget, namely that the document we refer to as the Good Friday/Belfast Agreement is not just the deal reached among the parties in Northern Ireland, it is an internationally recognised agreement between the two Governments.

This point was made forcefully at the UK House of Lord’s EU committee last Tuesday by former Taoiseach, Bertie Ahern, when he gave evidence alongside former Taoiseach John Bruton on the impact Brexit will have on UK./Irish relations, both political and economic.

As Mr Ahern reminded them, the British Irish Agreement (BIA) is the bedrock of that settlement.

Even though it appears at the start of the document; the portion we think of as the Good Friday Agreement (it is referred to as the multi-party agreement in the document) is actually the annex to the British Irish Agreement. Not that its position matters greatly, as the BIA commits the two Governments – as a matter of international law – to its implementation.

The provisions of the British Irish Agreement are not something that Mrs Dodds, First Minister Foster or anyone else can wish away. Indeed, the BIA will have to be a part of the post Brexit treaty between the UK and the EU.

The reason for stressing the significance of the BIA is evident from the first line of Article 1.

It says that both sovereign governments

“recognise the legitimacy of whatever choice is freely exercised by a majority of the people of Northern Ireland with regard to its status…”.

Later in the same Article, it says:

“…it would be wrong to make any change in the status of Northern Ireland save with the consent of a majority of its people;”

These lines are crucial. Though they appear in the BIA in the context of a move to a United Ireland, those core principles apply equally to any change in Northern Ireland’s constitutional status: majority consent within Northern Ireland is required.

The DUP cannot have it both ways on this. It affirms its allegiance to the sovereign government which contracted the agreement and is thus bound by it. It put its case against the deal to the people on the Good Friday Agreement in 1998, and it lost. Just as it put its pro-leave case to the people of Northern Ireland last June and lost again.

Yes, it is in a bind, which may explain some of the hyperbole from its recent conference, but welcome to politics.

The DUP may not like the fact that the people of Northern Ireland voted against Brexit and would prefer to remain within the EU, but that is the situation and accusing Dublin of talking down the North will not distract from that reality.

The DUP put a pro Brexit position to the voters, though it did so unconvincingly with some senior DUP-ers privately indicating their preference for Remain, and the voters rejected it.

Now it has an obligation to reflect that majority view as well as its own defeated minority view. The “D” in DUP does supposedly stand for democratic, afterall.

Despite Mrs Foster’s playing to the gallery last Saturday with some southern bashing, the DUP cannot construct majorities to suit its political needs, no more than it can construct its own facts.