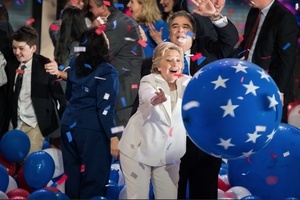 But know Derek has some ‘hard evidence’.

A week before the UK’s Brexit referendum I wrote an analysis piece for Slugger O’Toole  in which I criticised, at length, the poor preparation and campaign messaging of the Remain side.

But, for reasons attributable to the triumph of hope over experience, I ignored the evidence I had just presented and concluded – on the flimsiest of evidence – that Remain would still win.

Now, with one day to go, I may be about to do the same thing again by predicting that Hillary Clinton will win the U.S. presidential election – though this time I think the hard evidence is on my side. 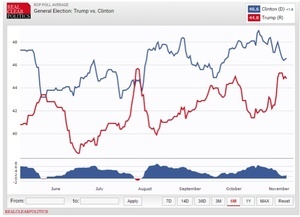 If you look at a graph (above) of the US presidential public polls over the past 6 months you will see that there have only been two brief points where Donald Trump was ahead. The first was in June and the second was just after the Republican Convention.

For all the rest of the time she has been in front.

But you notice something else. Whenever the polls start to show him as getting close to winning, her support rises. When he seems out of contention, as he briefly did after the release of the “bus” video, her voters slip away. They only re-emerge, reluctantly, when they realise that he is once again back in contention.

Trump or, more correctly, the prospect of a Trump win has become a better motivator of Hillary’s supporters than the candidate herself. It is as if she has a cohort of ‘supporters’ who are more motivated to support her to stop Donald than they are to support her to make her President.

As we saw from Brexit, there are dangers in depending too much on public polls – and I stress the word public. Political parties do not do poll in the same way as news media.

Political party polling is more targeted and more refined – it looks for movement in specific sectors (demographic/geographic) of the electorate, not the whole mass.

Fortunately, for Hillary, there is evidence beyond the public polling which suggests that she will prevail.

The first is the changing nature of American society. The demographics suit her. Her supporters are mainly college educated, they are also non-white. These two groups are on the increase – more Americans are now college educated and a higher percentage of the America population is non-white.

Trump’s supporters are mainly white, male and non-college educated. For reasons I have explored here several times before; white blue-collar workers (and ex-workers) are angry and disillusioned with the system.

Perhaps some see Trump as their last best chance of having a white and male President, but most just want to stop globalisation and trade deals that have seen their jobs shipped out to Mexico and China. This includes a chunk of blue collar workers in the rust-belt states who supported Obama in 2012 and are now backing Trump.

The other factor favouring Hillary is the way that campaigns are organised and the critical importance of voter databases. These databases are vitally important to US elections in a way that they are not here, due to our increasingly strict data protection rules.

In America both parties know who they need to get to the polls in fine detail. Clinton’s campaign knows county-by-county just how many voters it needs to get out to vote and precisely who they are. Their ground war over the past few days and weeks has been focused on get out the vote (GOTV) operations in a way that much of Trump’s own campaign has not.

Trump himself prefers the air campaign, conducting big rallies and using the media to reach out to the voters. Corey Lewandowski, Trump’s one-time campaign manager, has been dismissive of these ground campaigns, calling them old fashioned.

While the Republicans (GOP) also have a strong ground campaign, especially as it has so many Senate seats to defend, its capacity and/or its willingness to assist the Trump effort varies from State to State. In many areas the GOP is using the probability of a Clinton win as a way to motivate its base to back its Senate and House candidates to counter balance a Clinton White House.

The third factor favouring Hillary Clinton is the Electoral College. Tight elections are the norm in the US. Obama’s margin of victory over Romney in the 2012 popular vote was 5 million out of the 129 million votes cast. Obama was the winner in 26 States, plus Washington DC, while Romney won in the remaining 24. In terms of the Electoral college Obama won by 332 to 206.

In 2000 George W Bush was the winner in 30 of the States, but just shaded the electoral college winning 271. In terms of the popular vote he lost to Gore who won 51 million votes to Bush’s 50.5 million.

The point of these examples is to show that Democrats are traditionally stronger in the States that have the higher electoral college votes – the so called Blue states – another factor giving Hillary the advantage.

For these reasons, I think Hillary Clinton will be the 45th President, though I would not be willing to bet on the margin. My own best guess is that she will get 290 electoral college votes, but it all depends (once again) on Florida.

The one thing I am prepared to bet on, is that the furore and turmoil of this divisive and nasty campaign will not end with the result. If anything, it is likely to get worse. The next President may well be faced with a task and a challenge which the conduct of the campaign has ensured they cannot fulfil.