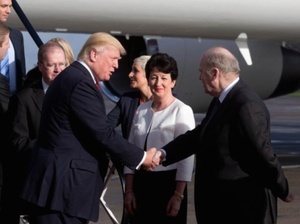 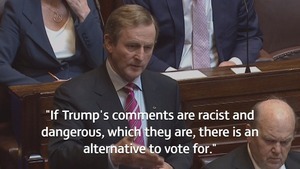 Donald Trump and Michael Noionan at Shannon Airport in 2014;  Enda Kenny in the Dáil  during the US primaries.

Taoiseach Enda Kenny spoke to journalist Martina Fitzgerald on RTE’s News at One in the last hour.

Enda Kenny: “…Ireland falls into the category of wanting to work very closely with the United States and we will work vey closely with the president and with his new administration. One element I pointed out to him in the letter I sent to both he and the vice president is that immigration reform is something of importance to Ireland here and because of the new change in both the Senate and the Congress, we will work closely with the Republican members there and on the basis of hopefully seeing immigration reform put back on the agenda.”

Martina Fitzgerald: “But do you stand by the comments that you believe, that some of his statements were racist and dangerous and that you would explain that to him…”

Kenny: “I referred to the comments that he made in the heat of battle in the primary election and obviously, I will work very closely with the president-elect. I listened, as I said, to his first comments this morning about healing wounds, about building partnerships about working with other countries that want to work with the United States and we fall into that category very much. Our relationship with the States for many years has been expanding and developing. I might point that, for instance, 100,000 American people are now employed by Irish-owned companies across 50 states.”

Fitzgerald: “So you won’t be withdrawing that statement that you thought they were…”

Kenny: “I will work very constructively, as will the Government, with the American administration. I see our interests as a country that has had a long proud history of working with America, very closely with America, to do so in the future. I look forward to that.”

Fitzgerald: “What about his plans to slash US corporation tax to 15%. How concerned should this country be about that?”

Kenny: “Well obviously taxation is, in respect of the United States, are a matter for the US administration. Our corporate tax rates here are a matter for the Irish Government, as a member of the European Union. It’s within our competence, as a national entity, to deal with it here ourselves. So, from that perspective, I expect business to continue, and to continue very strongly. In fact, the investment line from the States into Ireland continues to be very strong. We want to see that continue to develop for the future. It’s not just about tax, it’s essentially about the quality and the range of young people coming through to meet the emerging skills and demands of the future.”

Kenny: “Well, many countries in Europe are changing their corporate tax rates. That’s within their competence. As I said, it’s the European Union measures. Matters of corporate tax for the United States are a matter for their administration and I’m sure they will reflect on that in the future.”

Listen back here in full here