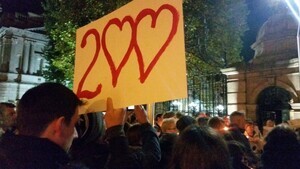 The Dáil passed an all-party motion committing Ireland to take 200 children from the former makeshift refugee camp in Calais, France.

It passed without debate.

The motion came about following a campaign by the group Not On Our Watch – a group of Irish volunteers who have been travelling back and forth to Calais to help those present.

The group, and supporters, held a vigil outside Leinster House last week calling for the motion to be carried.

Tánaiste and Minister for Justice and Equality Frances Fitzgerald: I move:

— stands in solidarity with all people displaced by war and conflict seeking international protection in Europe;

— notes that the French Government has dismantled the refugees camp in Calais and has moved the unaccompanied 1,500 children to other areas in France;

— notes with concern that up to 10,000 children are missing and at risk across Europe and that this requires a special humanitarian response from European Union (EU) member states;

— commends the Irish humanitarian response led by the Naval Service’s ongoing search and rescue operations in the Mediterranean Sea and our humanitarian aid programmes;

— notes the establishment of the Irish Refugee Protection Programme in September 2015 to implement the decision of Dáil Éireann to bring 4,000 persons seeking refuge to Ireland and opt in to the EU relocation and resettlement programmes and endorses the stated priority to support the wellbeing of, and to provide safe services for, the protection of unaccompanied minors, children and their families;

— notes the disappointment that there is slow progress to date in actually relocating refugees to Ireland for various reasons;

— commends the work of Irish non-governmental organisations (NGOs) and their volunteers for the support that they have given in addressing the migrant crisis;

— agrees that where practical to prioritise those unaccompanied minors from countries specified in the EU Relocation Programme as those who are likely to be in most need of assistance; and

— notes the ongoing commitment and resources of the French and UK authorities to provide protection to unaccompanied minors from the unofficial camp in Calais in accordance with EU and international law; and

calls on the Government to:

— convey to the French Government the solidarity of the Irish people and of Dáil Éireann in relation to the protection of unaccompanied minors previously living in the unofficial camp in Calais and their readiness to offer assistance if needed;

— act now to ensure the relocation to Ireland, by 1st May, 2017, of 200 of these unaccompanied children;

— commence a programme of relocation in liaison with Tusla and Irish volunteers and youth care professionals operating in Calais in a structured and timely fashion with the best interests of the children always given primacy; this programme is to compliment, and is additional to, the Irish Refugee Protection Programme;

— work with the French authorities, in accordance with international law and in consultation with youth care professionals formerly working in the camp, to identify those unaccompanied children who would want to come to Ireland;

— make available the necessary resources and expertise to Tusla, all relevant agencies and non-governmental organisations (NGOs) so the vulnerable children can be offered a new start with those families that have offered to provide them with a home or in other appropriate settings; and

— use this pressing need to reaffirm the Government’s overall commitment, on behalf of the people, to a coherent national programme involving the public and private sectors, communities, NGOs and volunteers, that would help to establish Ireland as a society of equality, tolerance and diversity.”

Regina Doherty: “I move amendment No. 1:

“That the following text be added to the motion:

“That Dáil Éireann will work with the French authorities, in accordance with the national and international law, and liaise with volunteers and youth care professionals formerly operating in the camp to identify up to 200 unaccompanied minors previously living in the unofficial camp in Calais who expressed the desire to come and stay in Ireland so that they can be relocated as soon as is practicable.”

Motion, as amended, agreed to.

Previously: For Your Consideration: Voices From Calais