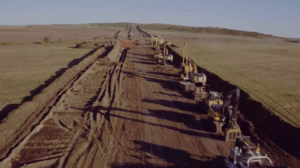 Given what we’re seeing in the election’s aftermath, photographer-filmmaker Lucian Read clearly picked a prescient title for his recent mini-doc series on inequality in the United States: America Divided, which aired on EPIX in October and November, took us to corners of a nation still hurting from the Great Recession—from an addiction-ravaged Rust Belt town reeling from factory closures to New York City, where the housing crisis proved devastating to many Latinos and African Americans.

Premiering here, Read’s latest short film, Mni Wiconi: The Standing at Standing Rock, turns a camera on the plight of Native Americans, a group that has been neglected and wronged perhaps more than any other in this nation.

2 thoughts on “Taking A Stand”