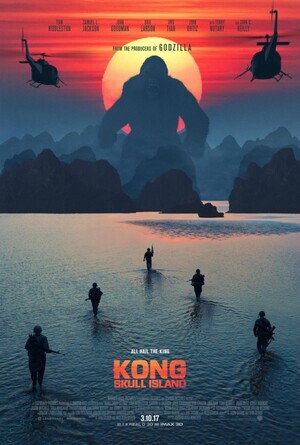 2. Blockbuster and their sequels aren’t enough anymore. Warner Brothers are getting in on the “shared cinematic universe” train by making this a prequel to the so-so Godzilla (2014), setting up a showdown between the two in the ingeniously titled Godzilla vs Kong, pencilled in for 2020.

3. All going well, the long-term plan is to bring to life more and more Kaiju monsters, which has been a consistently popular genre in Japan since the 1950s.

4. Kong: Skull Island is set in the 1970s, hence the noticeable Vietnam War motif running through the trailer: Creedence Clearwater Revival, the helicopter fleet, napalm and John C. Reilly doing a PG version of Dennis Hopper in Apocalypse Now (1979). Tom Hiddleston’s got his work cut out for him lopping the head off that giant buffalo though.

5. Despite winning Best Actress at this year’s Oscars, and playing a leading role, it’s strange that Brie Larson doesn’t warrant any lines in this trailer.

8. Part of the appeal of the aforementioned Godzilla reboot was that it wasn’t played for laughs; director Gareth Edwards attempted to inject some actual drama into the scenes between the carnage. That wasn’t always successful, but it’s still somewhat disappointing that this movie is heading back towards the Marvel brand of action comedy.