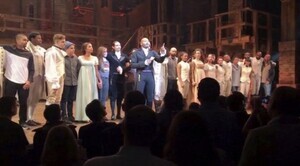 From top: The cast of Broadway show Hamilton address Vice President-elect Mike Pence after the show during the weekend; Derek Mooney

As dramatic events on Broadway dominated the news cycle Donald Trump and his key aides played us all for fools.

As I sat sipping my early morning coffee and flicking through the news alerts on my phone, I came across this headline from a story in the business section of today’s Belfast Telegraph: “Applegreen moving ahead with expansion in Northern Ireland despite Trump’s win“.

By coincidence I was reading this as I sat in the Applegreens on the Stillorgan Road. It was too enticing to resist.

Had the Donald tweeted something overnight to put the future of the North’s motorway service station industry in jeopardy?

Eh no. It was some sub-editor’s attempt to put an even bigger spin on a decent good news story about Applegreen planning to build additional service stations by mentioning the fact that they have some outlets in the U.S.

In terms of putting a local spin on an international event it doesn’t quite match the way the Buchan Observer, a local Scottish weekly paper in the area when Trump owns a golf course, announcing his election: “Aberdeenshire business owner wins presidential election”. It does, however, remind us that events many thousands of kilometres away can have ramifications here, even if they are tangential.

In terms of the Applegreen story the Brexit angle would have been the bigger one as the company has a significant presence there, but at the moment Trump is a much bigger and more colourful story than Brexit and just maybe Trump’s orange hue gave it an added local dimension to counter the green.

Either way Trump is impossible to ignore. He is larger than life and he knows it. Shoe-horning him into a story or an event adds an extra bit of oomph and helps transform a mundane run of the mill announcement into something that seems more significant.

The problem is that we risk trivialising something serious. Donald Trump is going to be the next President of the United States and the decisions he takes on a range of issues from climate change to U.S. protectionism to whether or not to back Assad will impact us over the coming years.

So too will other developments due over the coming months; including the March 2017 commencement of Britain’s Art 50 negotiations; the outcome of the French Presidential Election in May 2017 and the continuing rise of the likes of Geert Wilders.

Between Trump, Brexit, Le Pen etc. we are in for a period of instability, especially over the next few months when the uncertainty and transition in the EU and the US allows the likes of Putin a window of opportunity to take advantage.

This is a fraught time, yet so much of our newsfeeds are filled up with trivia such as the booing of VP elect Pence at a Broadway play and Trump’s Twitter reaction to it. 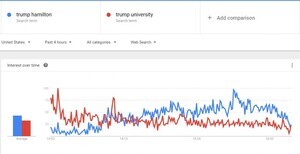 The Hamilton tweet is good example of how we way underestimate both Donald Trump personally and the team around him.

The fact that he got selected as the Republican nominee and then elected as their candidate should have been proof enough of his ability and his acumen. So too is his ability to use the self-righteous anger of others to dodge far more serious issues and to also turn it back upon his critics is something to behold.

When the news agencies ran with the footage of the cast of the Hamilton musical using their curtain call to say a few words to Pence, Trump took to Twitter to say:

“The Theater must always be a safe and special place. The cast of Hamilton was very rude last night to a very good man, Mike Pence. Apologize!”

Up to the time of Trump’s Hamilton tweet the trending news topic online was Trump’s sudden settlement of the Trump University fraud suit against him for €25 million, without admitting liability.

The media – and people like me – see the Hamilton tweet, become self-righteous and indignant about how he, of all people, could slam others as being rude, and suddenly a real and substantial issue, namely his settling a major fraud case slips easily into the background.

Like many others I was on Twitter reminding people how Trump’s rallies were hardly a safe and special place for freedom of speech – or for minorities or those with disabilities – and was helping Trump bury the news item he wanted buried.

And it worked for him. The Trump University story even ended up way down the homepages of the Washington Post and the New York Times – two outlets not known for aiding and assisting Trump. So too, did the story of how the Trump organization was encouraging foreign diplomats into staying at one of its hotels.

It is a mistake to dismiss Trump and his key aides as just master manipulators. Yes, they have those skills, but they have a lot more than that. They have a political agenda too.

Trump’s senior adviser Steve Bannon, gave a potential insight into what underpins this agenda in a Skype talk to the Dignitatis Humanae Institute in June 2014.

It is a serious agenda which needs to be challenged and scrutinized seriously. We need to stop playing Trump’s three card twitter trick and focus on what is serious and leave the trivia to the trolls.

26 thoughts on “And We Are Merely Players”