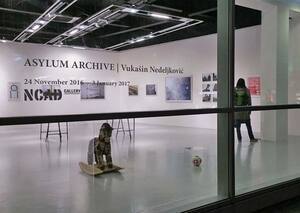 You may recall a post in March by visual artist and researcher Vukašin Nedeljković, called Postcards From Direct Provision.

Vukašin, from Serbia, sought asylum in Ireland in 2007, and was eventually granted ‘leave to remain’.

He founded Asylum Archive which aims to “collaborate with asylum seekers, artists, academics, civil society activists, amongst others, with a view to create an interactive documentary cross-platform online resource, which critically foregrounding accounts of exile, displacement, trauma and memory”.

Vukašin is running an exhibition – called Asylum Archive – of accumulated artefacts, oral histories and photography at the NCAD Gallery on Thomas Street in Dublin 8,  until January 3, 2017.

The NCAD Gallery is open Monday to Friday from 1pm to 5pm.

1 thought on “Inside The Asylum”