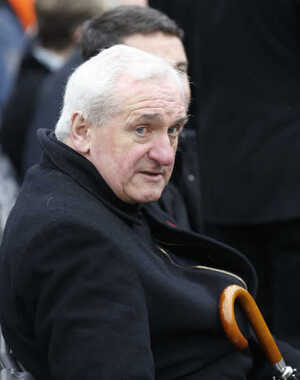 On the possible return of Bertie Ahern to the political stage….

The Liberal Left: architects of the modern day malaise we find ourselves in, the ones to blame for the plight of the worker, the state of the country, the failure of multiculturalism. The lily livered left have much to answer for.

Yet this argument is baffling. I can understand the words, but not the logic. Surely for the left to be blamed for the current climate we find ourselves in the parties of the left must have been in power.

The media must be propagating a socialist policy whereby the right are victimised and we have been led blindly to our own social destruction by Trotskyites.

These valiant champions of the working people have hindered the development of private wealth. These men and women who have consistently stripped a magnificent health service of public funding, given their schools to private companies and privatised their postal service at a loss must surely be left leaning. Somehow this is the logic that we meet.

That the left is to blame for modern problems and yet they have had no power (before people jump on the inclusion of Tony Blair I am aware he was a Labour P.M. however his actions outdid even the conservatives).

Let’s not forget our own social warriors like Charlie McCreevy, Phil Hogan and Charlie Haughey. All liberal lefties who have crippled our country through their socially minded inclusive policies.

How these men, representative of the political class, have brought the private sector to its knees is astounding. These Guevaras, these valiant men must be saluted as heroes of the left. Not to mention the left leaning media as owned by Denis O’ Brien and Rupert Murdoch.

Now, as we face crises both nationally and internationally our main opposition party, who are propping up a floundering government, are inviting back the architect of our travails. A man, who resigned rather than be banished, is being brought back as the great white hope.

Here is a man who knows how to win elections, knows his constituency inside out and knows exactly his own role in our plight. And here is a public being ridiculed again. The arrogance of both centre right parties is astonishing and would be hilarious if it wasn’t so insulting.

The reason I am writing this is because I am sick of hearing how the left are to blame, regardless of the problem. The left have not been in power to actually make any decisions in Ireland, England or the US. In fact there is no liberal left in Ireland. Both of our functioning parties are to the right of centre. This is indisputable.

The left is in disarray both here and in England while the middle class and working class get squeezed tighter and tighter. Of course nothing changes because there is no option. There is no alternative to politics of the right in Ireland.

The media dismisses the parties who try to take up the mantle of the left as being radical and loony. They are presented as being incapable and even to blame for where we are now.

All the while the established parties somehow are presented as the safe option. The parties who forced us into this crisis and who implemented a failed austerity policy are the ones to trust.

This leads me again back to where I started…the damn left have got us into this trouble. Let’s keep voting the same heroes back into power. If we do, maybe we can keep the housing crisis going, watch homelessness rise, see the privatisation of water we already pay for, watch hospital overcrowding reach record highs on a weekly basis and maybe see a rise in emigration again.

Previously: David Wall: The Product Of A Cultural Shift

A Snapshot From The Bubble

The Man Who Fell To Bert