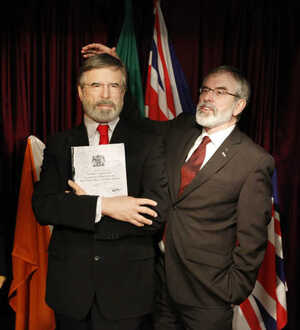 The drama and untruth surrounding Gerry Adams handling of the Stack family will not topple Adams as leader, but it points us towards the fault line under his leadership that will.

One of the most cherished tactics of the ever harder working army of Gerry Adams defenders is the “whataboutery” argument.

It is deployed, almost as regularly and speedily as the online shinnerbots, whenever Adams comes under attack. Indeed, whataboutery has so become the modern-day Provo’s weapon of choice that we may yet see a range of whataboutery trinkets and t-shirts available for online sale alongside the old Kalashnikov pins and ‘sniper at work’ t-shirts

The whataboutery tactic is a form of ad hominem attack, where you attack your critic, but you make it seem like you are expressing concern for others.

We saw it used a lot last week as the troops rushed forward to defend Adams in his dealings with the Stack family.

Asked why Adams would not give the Gardaí the name of the person he took a blindfolded Austin and Oliver Stack to meet; they answer: what about all the other victims? Why do you only want to talk about Brian Stack? Why are we not talking about all the others?

The point that they very conveniently forget is that Brian Stack was one of those “other” victims about whom they themselves have not spoken for years, if not decades. He was one of the unnamed others when we spoke about other named victims.

Adams and, by extension, Sinn Féin likes its victims in the abstract. In theory Sinn Féin has huge sympathy for all victims. Its rhetoric on victims – as a collective – is close to faultless.

A major problem emerges however when it comes to putting that rhetoric into practise for individual victims, particularly the victims of the Provos. Then the sympathy comes more slowly and rarely stretches beyond a few tired old phrases.

The Stack family has been quietly and patiently seeking the truth for decades. Brian Stack’s name and his memory is being spoken about now, not because Michéal Martin or Enda Kenny have brought it up, but rather because Austin Stack and the Stack family have.

I should at this point declare that Austin Stack is a friend of mine and that I have known him for very many years. I know that Austin has been working quietly and constructively with victims’ groups, North and South, for several years.

I know this partly due to my past involvement with the Glencree Centre for Peace and Reconciliation. As the centre operates under Chatham House rules I will not identify any of the people I have encountered there, but I can say that I have seen victims and former combatants from all sides to the conflict in Northern Ireland reach out to help each other. This includes people with provisional IRA connections.

The other assertion that Adam’s apologists make is that the rest of us are trying to hold Sinn Féin to a higher standard than others. What they really mean is that we are wrong not to hold them to a lesser one.

As part of this process they consistently and persistently attempt to re-write the history of the past fifty years on this island. They try to portray the IRA as arising seamlessly out of the Civil Rights movement of Hume and Cooper as a popular army fighting on behalf of all of us against a British aggressor.

It is this concoction of a false past and a fake narrative that creates a responsibility, if not an imperative, on the rest of us to call Sinn Féin out. We all have a particular duty to hold the Provos, the INLA and all the other self-styled republican terror groups to account as they claimed to be carrying out their campaign of terror in our name.

They sought to embroil us all in their actions, so they and their apologists must face the opprobrium of those whose mandate they erroneously claimed.

Holding the Provos and the others to account does not stop us from doing right by all sides. The whataboutery is wrong. So, we should and we must also pursue the British government and security forces and hold them to account too for their excesses, their dirty tactics and abuses of human rights during the conflict.

The drama and untruth surrounding Gerry Adams handling of the Stack family will not topple Adams as leader, but it points us towards the fault line under his leadership that will.

One of the smartest and most consistent voices of reason in Northern Ireland is that of Derry man, Denis Bradley. Writing in the Irish News just before the latest phase in the Stack drama unfolded, Denis said:

“Gerry Adams should ride off into the sunset. That day has arrived. No matter what good or important contribution already made, his presence is now a hindrance.”

He is right. Adams has stayed on for far too long. Over the past few years, perhaps since winning his seat in Dáil Éireann, Adams has focused more on turning Sinn Féin into an organ for promoting the myth and legacy of Adams than a political party looking to change Ireland.

As I have written here before, Sinn Féin is not so much a “party in transition” as it is “transitioning into a party”. Adams handling of the Stack killing and his apparent insistence that the next generation of Sinn Féin put their fingerprints over his defence can only slowdown that transition process, if not reverse it.

The eagerness of Mary Lou McDonald to be one of those championing her floundering leader may help her gain the support of the Sinn Féin grandees in Belfast, but it may render her hoped for leadership banjaxed before it starts.

And so, I end this week’s Broadsheet post. Now, let the tirade below the line commence…