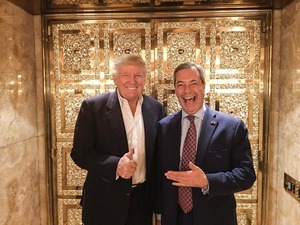 The resounding message of 2016?

It’s time for liberals to get down and dirty.

It’s been a crappy year. A crappy, crappy year. A year where the favoured, successful, political tools were those of fear, hate and ignorance. Those who have used these tools have become triumphant not by changing the rules of the game, but by working them through to their logical conclusion.

Lying, lack of disclosure and deceit have sadly long been part of our political discourse. All that those who have succeeded, now, have managed to do has been to ignore truth in any form whatsoever, to create a more sellable narrative.

Those of us who have lost, and we have lost badly, should waste no time crying into our lattes. We must adopt similar tactics to restore obvious truths into the greater public consciousness.
In doing so we need to be aware of who we are trying to repersuade.

A number of stupid political choices may have been made in 2016, but to characterise those who have made such decisions as stupid, or deplorable or ignorant, will make it impossible to change such minds again.

We need to acknowledge the liberal/progressive conceit not to have engaged with those who had opted out of the political system.

Those now politically dominant should be acknowledged for bringing the long neglected into the political fold. Involved consent is good. Informed consent is better.We should also remind ourselves that this new vanguard of the right is not a majority, but it has become a dangerous plurality.

How we persuade is also important. It won’t be through tedious debate or sanctimonious finger pointing. Getting down and dirty is where liberals/progressives need to be. Messages need to simplified, made into soundbites then repeated ad nauseum. That oxymoron, liberal disdain, should never again be given any oxygen.

What particularly needs to be challenged is the narrative that this elite that pretends it is not an elite, is best placed to meet the needs of the dispossessed and long neglected. Making them believe that in helping the ultra rich become richer we all will somehow benefit.

This is not my usual turn of phrase. I would, and should, apologise. However I have become convinced, that those of us of a progressive bent, need to construct a metaphorical mirror to reflect back, to those currently controlling the political agenda, the ugliness they have helped to create.

The new dispensation feeds upon liberal niceness. It’s also likely that these heroes will fold if effectively challenged.

The coming era will be confrontational. It needs to be. The danger for progressive forces, is to ensure the clarity needed as to who the real opposition is. Progressives need to feed, not feed off, each other. It’s going to be a bumpy ride. There may further more depressing defeats ahead. But we’ve got to start somewhere.

Happy New Year by the way.

74 thoughts on “Goodbye To (Almost) All That”