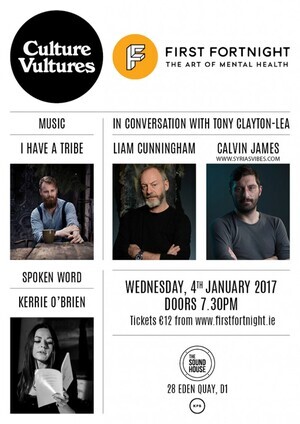 As part of the First Fortnight festival, Culture Vultures – a pop culture, salon event co-curated by Andrea Keogh and its presenter Tony Clayton-Lea – will host I Have A Tribe, actor Liam Cunningham, Calvin James (Syrias Vibes) and Kerrie O’ Brien.

Patrick O’Laoghaire, aka I Have A Tribe, spent most of last year travelling Europe performing songs from his debut album, Beneath A Yellow Moon.

Last year, Kerrie O’Brien she was shortlisted for the Penny Dreadful Novella Prize, and is currently working on her debut novel. In October of last year, her debut collection of poetry, Illuminate, was published by Salmon Poetry. Kerrie is also the editor of Looking At The Stars, a limited edition anthology of Irish writing that aims to raise €15,000 for the Dublin Simon Community.

The current conflict in Syria is recognised globally as a human rights issue, and in an exclusive Culture Vultures event for First Fortnight, we bring together two Irish people who have first-hand experience of a country in chaos and people in turmoil: DJ Calvin James, of Scoop Foundation and actor Liam Cunningham – in conversation with Tony Clayton-Lea.

Previously: There Is A Light That Never Goes Out