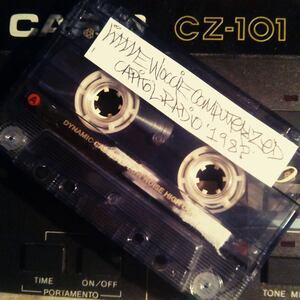 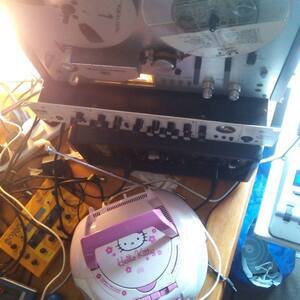 The following is the story of how Cork-resident DJ and producer T-Woc assembled his mixtape Little Woccie – Computerized, a tribute to ’80s radio, streaming above in two sides of virtual C90.

Released last January it flew waaaay under people’s radars considering the hassle he went to, so here’s the story in full…

Facebook just reminded me that this is a year old, so thought I should mention, as quite a few people I realize didn’t twig it, that there was no Little Woccie show on Capitol Radio in 198?.

I made this tape around last December. I wanted to do a digital mix tape for a while, but can’t really compete tune wise with heads like Copenhagen’s Firehouse crew, Deadlydragon et al… and was listening to lots of old radio cassette rips at the time, so thought I’d make a tribute to the ’80s taped-off-the-radio vibe, computerized riddim heat, crappy but addictive ’80s ads I grew up with, and squeeze in some giggles along the way.

Took me fucking ages, months actually. Tracking down those extra few 7″s that had to be on it, mixing the set down onto a reel to reel, trawling through hours of ’80s Youtube commercials and radio mixtapes, mastering record-pause dubbing on a cassette player, and finding nice radio hiss on Johnny Tasty’s little sister’s Hello Kitty radio.

Unfortunately the amount of work going into something doesn’t always equal popularity and it kinda flopped. I think maybe some of the in-gags are a bit obscure but fuck it, was a vibe putting it together.

He then proceeds to address the fictional backstory of the mixtape…

Little Woccie was supposedly on Capital in 198?, even if it was 1989 that would probably have made me the youngest radio DJ in history at 14.

I got the slot through my uncle ‘Ulich Wood’. My man who taped the show ‘Easy’ never lived in Cockfosters, but he was born on the exact same day as me in 1977, which is how long Steelie & Cleevie say they’ve been working together since in the documentary before my show.

…before issuing a guide to the retro glories thereon. Grab a tay.

There is also a clip of the weather (“this summer is going to be a scorcha!”), John Peel mentions later in the tape he is looking forward to his Festive Fifty Christmas show.

In the first ad segment (before the machines took over), the (popular footwork brand) Clarks commercial talks about treating the kids right, which runs straight into Mystic’s Youth Get Tricked.

Shortly after, the radio loses reception, and tunes into a Tom Baker Doctor Who radio show which is actually a TV commercial from 1980 for the short lived Prime Computers company, the sound effects from this turn up all over the rest of the tape.

Stone cold classic Scotch Videocassette commercial is also a TV commercial (you might remember Archie the Skeleton – rerecord don’t fade away), took me ages to get the fade away to distort each run.

Melle Mel sting for Mike Allen show, Mike Allen had just passed away when I made this, well worth tracking down the rips of his early hip hop and electro show on Capital called the Mike Allen show. RIP.

The radio loses reception and ends up on another channel with Tim Westwood, pretty sure Westwood was on Capital for the whole of the 80s (and back there today, cheesy as ever).

Kaos pad’s distinctive filter is pretty evident on the mix, the FX box wasn’t invented till 1999. We get the results from Wembley, Alan Partridge’s favourite Norwich City doing well. Steely & Cleevie from the TV doc again run the workings of the DMX drum machine, coincidentally over one of their own killer DMX cuts, Carl Meeks’ Danger.

Back to back 80s commercial killers ‘Allo Tosh got a Toshiba’ and the ‘Ariston and on and on’, neither were radio ads. Dunno why I didn’t put the Pato Banton version of ‘Allo Tosh’ on. Fail. A lot of the other ads such as for Casio, Commodore are TV ads as well, we got the UK’s TV growing up (S4C!) but not really its radio.

We lose reception again and treated to the Cars – Who’s Gonna Drive You Home, swiftly followed by The Dollar Van Man… Which as some keen spotter on Blood and Fire pointed out wasn’t released till 1997.

Cheesy wine ad which alludes to infidelity (‘is it because it is someone else’s wife?’), couple trickster jams after this.

I actually submitted this as a sound design project to get into my masters in college in the end so wasn’t a total flop, as I got it.

Tales of hard work and meticulous care like this abound all over the Irish music scene, regardless of genre. This is just one of them.

3 thoughts on “My Magnificent Mixtape”