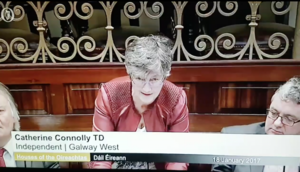 .@catherinegalway University Hospital Galway is not fit for purpose. Says the Taoiseach does not have a grasp of the crisis #dail #vinb pic.twitter.com/Whf6b339iF

To begin with (before the clip above), Ms Connolly said:

“Taoiseach, it’s Galway University Hospital is at crisis point. This is a hospital that serves a core population of 800,000 people and six core counties. In addition, it serves a number of other counties, given it really a population of a million that it serves.”

“Taoiseach, it’s operating in code black alert – the highest emergency code, together with a full capacity on an ongoing and prolonged basis. As a direct result, quite clearly, the obvious things happen, elective surgeries have been cancelled, large numbers of people have been left on trolleys, reaching a peak of 50 at Christmas time.

“And, in addition, and directly arising from that, we have an ongoing review of an operation performed in a ward; we’re awaiting a review of a death of somebody on a trolley in their 80s; we’re awaiting the conclusions of a report in relation to spinal surgery, inappropriately carried out in some places and causing premature deaths in two cases.

“We’re still awaiting confirmation that all of the recommendations of the Savita case have been implemented. In addition, we have very ill patients walking out of casualty on a daily basis and we have people with mental health problems being shoved through casualty.

“Indeed the capacity of the hospital, which is not a local issue nor a parochial issue, which I’ve said serves a million people, the capacity or rather the lack of capacity has placed it at number one on the risk register.”

….In addition, we have a report, independently commissioned by the Saolta Group and in relation to the accident and emergency, the physical environment is shocking and disturbing and unfit for purpose. We have a submission from Saolta itself and the clinical director of the hospital, telling us that ‘The current ageing facilities of the hospital are not fit for purpose, do not provide an appropriate environment to safely manage the current and future care needs of the population of that region.”

25 thoughts on “Meanwhile, In Galway”