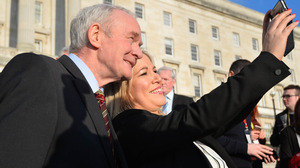 The Northern Ireland election campaign will show us the extent to which voters will engage differently, think differently and act differently away from the traditional, sectarian electoral ghettos.

After only ten months we are to have a another set of elections for the Northern Ireland Assembly. It shouldn’t be happening. An advantage has been identified. This early election is an attempt to take advantage.

As often has been the case in the North’s political history, those seeking advantage should be careful of what they wish for.

One thing that can’t be wished is Martin McGuinness continuing as Deputy First Minister. Observing his health has been a discomfort, not least for him. It’s hoped he can recover well. The illness has afforded him, at least, the somewhat dubious privilege of hearing his own eulogies.

These have been overwhelming positive, often from the most surprising of sources. They’ve mostly been deserved. He has made an incredible journey. His presence will be badly missed in the next Assembly, should it progress.

Not that I believe cuddly, chuckling Martin is an exact representation of who he is politically. He has, however, won considerable public respect for relating an honest account of what he has been and what he has become.

In this he has been far more honest than Gerry Adams. History will be kinder to him as a result.
And there is such a lot of history to assess. Gerry and Martin seem to have been in situ forever.

There may have been good strategic reasons to oversee that long journey from a paramilitary organisation with an attached political wing, to a modern day political party (albeit one that operates under a distinct military discipline).

The price has been to stifle, discourage and sometimes undermine a new generation of leadership. In the Republic there seem to be handful who are happy to wait their turn. In Northern Ireland (apologies The Six Counties), Martin McGuinness’ absence is likely to create a huge vacuum.

This would be a pity. As unnecessary as these elections are, they do at least offer a window opening on normal politics operating there. Away from the usual sectarian fault lines, the possibility exists of debates on standard political fayre.

Talking issues like corruption rather than head counts; accounting for being in government rather than seeking ranking in tribal groupings; having the prospect of an alternative government could all be to Northern Ireland’s advantage.

In last May’s Assembly elections some slivers of light were appearing. Sinn Féin were dealing with being seen as a party of the establishment, being got at by People Before Profit in West Belfast and Foyle (with the welcome election of Eamon McCann). The Greens doubled our representation coming very close to winning a third seat in East Belfast.

The reduction of constituency size from six to five seats, will make it harder for the smaller parties to continue this breakthrough, but it is important they can.

The smaller Assembly may limit the impact felt by the DUP and Sinn Féin for the decisions they have made collectively in government. The campaign will show us the extent to which voters will engage differently, think differently, act differently, away from the traditional, sectarian electoral ghettos.

I’m looking forward to knocking on a few doors up there. Given the madness of much of World politics these days, Northern Ireland may yet turn out to be a surprise beacon of hope.

73 thoughts on “The Ayes Of March”