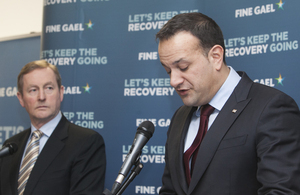 Replacing Enda without a major reappraisal of what Fine Gael stands for is to miss out on what the last election told us about the attitudes of the electorate and the state of politics in Ireland.

“I have had to ask myself that key question, the 3 am. question, if we are in government and there is a national crisis, if there is a sovereign debt crisis for example and [then Governor of the Central Bank] Patrick Honohan rings the Taoiseach – who do I want to answer that phone, I want Richard Bruton to answer that… The people are saying to us they don’t have confidence in Enda Kenny.”

This excoriating quote comes from Leo Varadkar on RTÉ’s Primetime during the failed June 2010 heave against Enda Kenny.

He was not the only one questioning Enda Kenny’s capacity for leadership. On the day before the crucial parliamentary party vote Richard Bruton told RTE’s News at One that:

While they, and many others, within Fine Gael, thought that was the time to dump Enda, the majority– slim or otherwise – of their parliamentary colleagues did not. The attempt to dump Enda failed.

The insurgents learned an important lesson six and a half years ago: do not underestimate Enda’s tenacity. While they were going on radio and TV in dribs and drabs to wound him, Enda and his supporters were working one-on-one with each individual TD, Senator and MEP to do, or offer, whatever was needed to secure the votes.

The mutineers learned that Enda is not an easy man to get rid of – not then and perhaps even not now. Back then they hoped that a series of bad polls for Fine Gael, even falling behind Labour in an Irish Times poll (them was the days!), might cause Enda to fall on his sword. They were wrong.

While he is now a lot closer to the end of his leadership than he was in 2010: Enda – and his team of loyal lieutenants – are still determined that they alone will decide when the end is nigh.

The understandable furore over Enda’s handling of the recent 3am Sinn Féin coalition question has hurt him. It has also hurt Fine Gael and has placed the issue of leadership firmly on the agenda.

Coming as it did just as another poll showed Fianna Fáil moving ahead of FG did not help the mood. But is this really enough to topple him right now? Or, to put it another way, if the mess that was the February 2016 Fine Gael election campaign was not sufficient grounds for changing leader, is this?

The problem for Fine Gael is not Enda Kenny, or at least it is not just Enda Kenny, it is bigger than that. The paradox that saw FG lose one third of the seats won in 2011 and still remain in office means it has not yet had come to terms with losing the 2016 general election. Consequently, it has not yet learned the lessons of that defeat.

Read the two post-election reports the party published in August 2016 and you will see what I mean. Both focused on communications and organisational minutiae while missing the bigger issue: what does Fine Gael stand for?

Recommendation 1 in the parliamentary party’s Pathways and Opportunities report states:
Briefing documents need to be one page, and they need to be brief…

While TDs focus on messaging problems may, perhaps, be code for Enda’s lack of communications skills, it is still misdirection.

FG did not see its number of seats drop from 76 to 50 and its vote share collapse from 36% to 25.5% because of the size of its briefing documents. It did so because of their content.

While it is probably unfair to expect reports, which were destined to be published, to gift their political opponents with any noteworthy critical analysis, it is not unreasonable to expect them to show some modicum of awareness of the core problem, even if only the usual platitudes.

Even outside the reports, we are not hearing any significant querying or questioning of Fine Gael’s purpose and vision beyond some whispering about who should be the face on the posters. According to a former Fine Gael TD. even this is not going to go anywhere until whoever wants the top job is willing to “put up”.

Switching Enda for Simon C or Leo or even for Frances, Paschal or Simon H – without a major reappraisal of what the party stands for is to miss out on what the last election told us about the attitudes of the electorate or the state of politics.

Rather than focusing on briefing notes and communications they should be deep diving into the serious analysis coming out from the last election.

This includes a recent report from Dr Deirdre Tinney and Dr Stephen Quinlan looking at populist influences in that result: particularly in terms of anti-elitism and distrust of politicians. This is the type of material that all political parties should be considering, not just Fine Gael.

As for the Sinn Féin comment that triggered this latest palace wobble: we will never know what An Taoiseach was thinking when he declined to resolutely rule out any coalition with Sinn Féin.

Perhaps he just misspoke? He wouldn’t be the first leader to have done it, though this explanation is unlikely considering how many times the question was put to him.

A more likely one is that he was trying to send out some subtle signal, but just forgot the subtle bit. Maybe he was trying to draw Mary Lou McDonald out on her comments that Sinn Féin would be open to have a “conversation” around a junior coalition role in the future.

Or, could it be that he and his advisers have concluded that their strategy of continually attacking SF is simply not having the desired effect and it is time to change tack and damage them more by pulling them in closer?

The fact that answer could be anywhere along a spectrum from wanting to consider SF as a future coalition option to wanting to cause them maximum damage indicates the scale of the problem Fine Gael faces about its lack of clarity, direction and identity.

While most of the pretenders could probably manage to appear less confused and confusing than the current leader, I am yet to be convinced that any of them possess his tenacity and steeliness or, more importantly, that the underlying reality would be that much different with someone else in charge.

20 thoughts on “Enda’s 3am Question Is Still Unanswered”