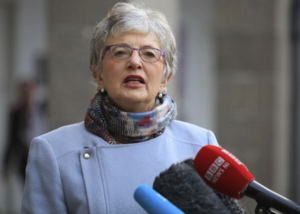 Further to reports that Sgt Maurice McCabe met the Minister for Children and Youth Affairs Katherine Zappone on January 25, 2017…

And Tusla chief executive Fred McBride telling Áine Lawlor on RTÉ’s News at One this afternoon that Tusla briefed Ms Zappone’s department about the matters concerning Tusla and Sgt Maurice McCabe “within days of us finding out, or certainly at my level, finding out what had happened here…I can’t get an exact date but within a couple of days”…

And Katie Hannon reporting on Prime Time last night that on January 27, 2017, the chief operations officer of Tusla wrote to the Secretary General of the Department of Children and Youth Affairs acknowledging that ‘mistakes were made in the management of this matter’ and saying that he had ‘instituted a case review internal to Tusla’…

And the terms of reference of a commission of investigation into Supt Dave Taylor and Sgt Maurice McCabe’s protected disclosures being published on Wednesday, February 8, 2017…

Sources said Ms Zappone had not informed Cabinet of the matter when the proposed terms of reference for the commission of inquiry into the handling of garda whistleblowers were discussed this week.

…Neither Ms Zappone or her spokesman have responded to the claims yet.

20 thoughts on “‘Government Sources Have Said’”