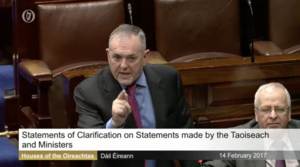 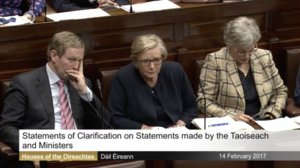 During the ‘statements of clarification’ session in the Dáil.

Taoiseach Enda Kenny was asked many times to state when he first became aware of the smear campaign against Sgt Maurice McCabe.

At one point, he had the following exchange with Sinn Féin TD Caoimhghín Ó Caoláin.

Caoimhghín Ó Caoláin: “Will the Taoiseach tell us when he first became aware of that smear against Garda Sergeant McCabe?”

Enda Kenny: “I became aware of it the same as most of the rest of the nation, which was after the Prime Time programme.”

This is despite the fact Labour TD Brendan Howlin spoke about the campaign during Leaders’ Questions the day before the Prime Time programme was broadcast.

Readers will also recall how that supposed conversation he had with the Minister for Children and Youth Affairs Katherine Zappone, prior to her meeting Sgt Maurice McCabe, never happened…

Fianna Fáil’s John McGuinness – who has previously said he was warned not to trust Sgt Maurice McCabe by then Garda Commissioner Martin Callinan in a car park of Bewley’s Hotel on the Naas Road on January 24, 2014 – accused Taoiseach Enda Kenny of knowing about the allegations being made against Sgt Maurice McCabe ‘a long time ago’.

Readers will note that, in the Sunday Independent at the weekend, Philip Ryan reported that Mr McGuinness claimed Mr Callinan made false child abuse allegations – about Sgt McCabe – to Mr McGuinness during that meeting in 2014.

John McGuinness: “We’re here discussing this public inquiry because of the fact that the McCabe family have no trust whatsoever in a private inquiry. We’ve had enough of them. And, in relation to the smear campaign, why is it that we cannot admit that ,for the last number of years, for anyone who wished to stop and listen to what was being said in this house…I’ll deal with the car park in a minute…why is it that when we were told what was happening in relation to Maurice McCabe, anyone that supported him, was sold this narrative that he was a sex abuser. That he had abused people sexually. And that’s what they said. And therefore, those that supported him were knocked off of their support by virtue of that gossip and that innuendo and that accusation.”

“So the fact of the matter is: that while that was going on, the Tusla file existed. So how many gardai knew about that Tusla file? How many in this house knew about the allegations that were being made? And when he appeared before the public accounts committee, the great efforts were made by this house – and by members within it – to stop him from coming forward. That’s why we’re here today.”

“Because we have ignored Maurice McCabe and the other Maurice McCabes that exist out there. And if we’re to have any public inquiry into this then we have to take into consideration, the culture that has sent all of those people out sick, some of them struggling now with mental illness. And we cannot ignore those people. And the Government cannot ignore them. But how many within Government knew about those, about these allegations that were being made? Even though it might have been gossip. It was gossip that was being spread maliciously, to take you off your game and not to support Maurice McCabe. And all of us, in this house, knew what was going on.”

Enda Kenny: “I think it’s obvious Deputy McGuinness that the entire country feels sympathy with the pressure and stress and distress of the McCabe family. Now am I, am I right or not or did you have a meeting with the former commissioner of the gardai [Martin Callinan] and did you hear information, relevant to a smear campaign against Garda McCabe? And if you did, what did you do about it?”

Frances Fitzgerald: “[inaudible]…you say you had your meeting. That would have meant that some of these issues that you were told about would have been dealt with in the O’Higgins commission…”

Fitzgerald: “But… you followed legal advice… and like Minister [Katherine] Zappone, I didn’t want to give legs to something that was totally untrue…”

Fitzgerald: “Then what are you saying…”

McGuinness: “…I felt myself that it was untrue. And that’s the fact of the matter but you did nothing about Maurice McCabe.”

Fitzgerald: “Sorry, deputy, you didn’t want to act on legal advice…but you had direct information, deputy, which is more than many people or anybody in this house had.”

McGuinness: “Those of us that were clearly associated with supporting Maurice McCabe, knew about this and not everyone in the house.” 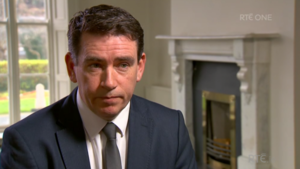 Mr Deasy explained to Ms Hannon that, on the same day the former Garda Commissioner Martin Callinan appeared before the Public Accounts Committee – and made his “disgusting” remark – he was approached by a senior garda who warned him not to trust Sgt Maurice McCabe.

He explained he lobbied Taoiseach Enda Kenny after the garda’s approach.

“Maurice McCabe was in the Public Accounts Committee the following Thursday and I thought that he was credible and I made that judgement.”

Katie Hannon: “You’re quoted after that meeting, actually, in newspaper reports, as saying he’s a credible witness, he’s responsible and knowledgeable in his answers. How did you square that with what you had been told about him, by this senior garda.”

Deasy: “I formulated a view that he was correct. I think that I and others realised that there was a campaign against Maurice McCabe, to undermine his character…”

Hannon: “Being run by who?”

Hannon: “At a senior level?”

Deasy: “Yeah and I had first-hand, you know, contact of that..”

Hannon: “So what did you do with this information?”

Deasy: “A couple of weeks later, I was having a meeting with Enda Kenny in Government buildings and, after that, it was on a separate issue, I asked to meet with him privately about Maurice McCabe and the entire affair. He would have known that that was significant. It’s not something I would have done every day. Probably twice in 15 years. And at that meeting, I said to him that I believed that Maurice McCabe would be vindicated. That he was being treated extremely badly. And that he was genuine and that this needed to be handled completely differently.”

Hannon: “And how did he respond to that?”

Deasy: “You know, he listened, he acknowledged it and the meeting ended. I do know, at the time, that another individual in Fine Gael was making a similar case to one of this cabinet colleagues, at the same time. And was being ignored and really wasn’t getting anywhere, was begin dismissed with regard to how the whistleblowers were being dealt with at the time and the treatment that was being meted out to them.”

Deasy: “I really can’t defend anyone in Government when it comes to Maurice McCabe.” 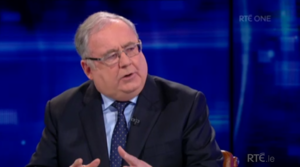 Former Labour leader Pat Rabbitte (above) told David McCullough how a garda told him of the false allegation against Sgt Maurice McCabe back in 2014.

Pat Rabbitte: “I did, yes. Maurice McCabe approached me at the end of 2006 or early 2007, about policing difficulties and malfeasance and he had a major, thorough file. And I helped him or advised him, on the confidential basis he sought as best I could. But, when the incident blew up in 2013/14  – probably early 2014 – I was asked on a programme like this, that same question. And I explained that I did indeed know Maurice McCabe as an upstanding and, in my view, an honest, conscientious policeman.”

“And I was approached that night by a friend of mine, who’s a retired garda, to say that he didn’t know that I had any knowledge of Maurice McCabe and that I better be careful because did I not know what was going around and he, graphically, told me what was going ’round.”

McCullough: “And did you tell anyone about that?”

Rabbitte: “No, nobody. I thought it was foul gossip. I didn’t believe there was anything to it. And I didn’t think it should be given legs. But I did express my view publicly and privately about the probity and integrity of Maurice McCabe.”

Previously: How Did He Get Here?