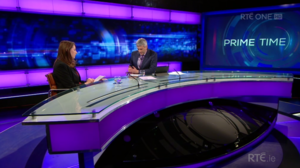 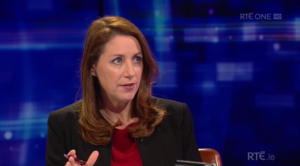 Further to last week’s Prime Time in which Prime Time‘s political correspondent Katie Hannon outlined the sequence of events concerning how a false allegation against Sgt Maurice McCabe ended up being circulated by Tusla.

The new information, as presented by Ms Hannon, means there are now conflicting accounts of how events unfolded – as put forward by the HSE, and subsequently the Minister for Health Simon Harris in the Dáil, Tusla, the Gardaí, and the solicitor for the woman at the centre of the original 2006 allegation.

David McCullough: “Now, lest we forget all this political turmoil is the treatment of Garda whistleblower Maurice McCabe and the revelation last week by our political correspondent Katie Hannon of the false sex abuse allegations made against him. As Katie told us, last week, those allegations in 2013 arose after a counsellor said she pasted the allegation from another file in error. Katie joins me now. There is a tribunal of inquiry to look into this and related matters. But, in advance of that, the department of justice has written to the Garda Commissioner posing six questions that the McCabes want answered, relating to: when the Gardai first learned about the allegations, about contacts between gardai and the supposed victim and contacts between gardai and the counsellor. And Katie, you have some new information about this?”

Katie Hannon: “Yes. Of course, a huge amount of focus has focussed on this referral from this counsellor that had this, what was described as this clerical error, this cut and paste error. Now, I’ve spoken with somebody who’s actually seen this document. We haven’t seen this document because it wasn’t released to the McCabes in the Tusla file because it had been retrieved because of data protection by the counselling service.”

“But, according to my source, what the counsellor is now telling the management there is that: what actually happened there was not a cut and paste error. She was actually using the template of a previous referral and typing over it, with this new McCabe referral and failed to delete some information referring to the previous referral. So it wasn’t a ‘pasting in’ error, it was a ‘failure to delete’ error. And she says that she just simply did not notice that before she sent on the referral [to Tusla].”

“Now, according to the person that I was talking to, who has seen it, it should have been obvious to anyone looking at it that there was a mistake in it because, I’m told, there actually was the names of two alleged abusers on the file that went over. Like the phrase that was used to me was: it would have jumped off the page. So, why that happened in Tusla when were then using this document to create the other files, the referrals, the files on the [McCabe] children, that’s the question that remains now.”

McCullough: “There’s been a lot of focus on how this error was ultimately discovered.”

Hannon: “Yes, and I’ve confirmed today that the girl at the centre of this, who made the original allegation back in 2006, she has given an account of how this happened that does not tally with the account that the Health Minister Simon Harris put on the Dáil record this week.”

McCullough: “And in what way is it different?”

Hannon: “Well, first of all, Minister Harris told the Dail that, and he was using information that he got from the HSE, he said that the girl had contacted the counsellor to say that the allegation of digital rape was incorrect, that she had never made it and that’s how the mistake came to light. That’s what the Dáil was told.”

“But I spoke to the girl’s solicitor today and he tells me that that is not the case. He says that, this is the sequence of events: the girl’s mother made the initial appointment, for her, with this counsellor. She attended just once. She had no idea that a referral had gone to Tusla as a result of this one counselling session, until many months later, her family were contacted by the guards and they were asked to attend to the Garda station about this allegation. Her parents went to the Garda station, looked at this, were presented with the allegation and said immediately: this is not our daughter’s allegation, this was never made.”

“And according to the girl’s solicitor, this was the last that she had to do with it, that she, whoever contacted the counsellor, it wasn’t her.”

“And also, what this does is it raises questions about when the gardai first were aware of this mistake. We know that Tusla sent them the file in early May. According to this account, from this girl’s solicitor, the guards were informed that it was incorrect, there was a mistake in it, by the 4th or 5th of May and that’s not what the rest of the files show…”

McCullough: “What does the Tusla file say?”

Hannon: “Yeah, the Tusla file says that the first contact with the garda was the original investigating guard that investigated the 2006 complaint – that was done back in August 2013. We don’t know what came of that, if the meeting took place. We know that Tusla contacted the guards with the referral in early May. We know that they were told about the referral, from the counsellor, on the 14th of May [2014] and then they say, the file says they contacted the guards one or two days after that.”

Hannon: “We do, we’ve two serious conflicts. We’ve a conflict between the account that the minister [for health] gave the Dail this week to what the client says as regards when we found out about the error and there are other conflicts about when the guards knew about it in the first place and when the guards knew this second allegation was a mistake. So, you know, the attempt or demand for the answers to these six questions might be trickier I think than we think.”

McCullough: “Hence, the tribunal, ok, Katie, thank you very much.”

26 thoughts on “A ‘Failure To Delete’ Error”