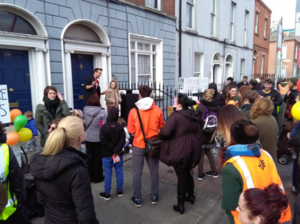 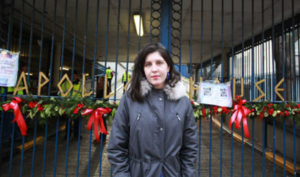 From top: A family fun event held outside the Mountjoy Street eviction in February 2016; Rosi Leonard outside Apollo House earlier this year

TV3 broadcast Inside Apollo House, a documentary about the occupation of Apollo House in Dublin by activists, artists, trade unions – to offer shelter to homeless people.

The 750 people who crossed the threshold of Apollo to volunteer their time serve as a testament to the power of self-organising against the housing crisis. The networks, connections and communities that made it possible did not spring up overnight; they mostly born from direct experiences of homelessness and austerity.

It has often been from these support groups that direct action has come, as through this form of support people can, without fear, have their voices and concerns heard. It has been from these spaces that much of the grassroots resistance to the housing crisis has come from.

Numerous actions emerged from these support groups over the last 18 months. The issues that spurred people into action were the same: evictions without suitable alternatives, and the poor, unpredictable standard of accommodation.

This week marks the one-year anniversary of the largest Dublin based anti-eviction action in recent years when families resisted the closure of a privately-run emergency accommodation centre for 10 days.

Dublin City Council responded by informing residents the centre would shut in a week and that they would be moved to different hotels, many of which were even more cramped, and further away from their children’s schools and their home communities.

A major block to families in the hostel supporting each other was a lack of any communal facilities, children’s play areas and a ban enforced by management on residents being in each others room, even by invitation.

As the date of the hostel’s closure grew closer, the residents met outside and began to form the simple demand that would not leave Mountjoy Street without the guarantee of safe, suitable and secure accommodation.

One of the families was already linked in with North Dublin Bay’s support groups and reached out for support. Families door knocked the area with local residents who had been involved in the Bolt Hostel action, a formerly vacant DCC hostel re-opened by activists in 2015.

The Bolt as it became known, was open for three weeks before a court injunction forced activists to leave. But many of the groups involved stayed in contact through the Irish Housing Network and worked together to support the families in Mountjoy Street.

The campaign to support the families was visible with neighbours putting posters in their window and local groups, including the Grangegorman squat, holding family-fun days outside the property, with local businesses donating food.

“The support from the community was so important,” says Aisling Kenny, one the families who resisted the eviction. “It made me feel like I wasn’t just fighting my own fight.”

Over the summer of 2016, weekly sit-ins of Dublin City Council’s offices were common with families demanding more suitable and secure housing and winning victories on major issues that were affecting them daily in emergency accommodation.

Lack of cooking facilities or access to hotel restaurants is a major health risk to children and families in emergency accommodation. Families successfully fought to prove the food boxes council were providing were unfit for the dietary needs of a child and secured food vouchers through these meetings, as well as many people having their individual needs met.

State or charity support for people in housing difficulty can be irregular with unclear guidelines in place, a fact which can leave people incredibly vulnerable.

In July 2016, a family were evicted from the Regency Hotel after they reported the level of mould in their room was causing their children severe respiratory problems. So many homeless families were being accommodated in that hotel that it had its own key worker (a support worker usually appointed by homeless charities) appointed to it – a fact that is not uncommon in hotels around Dublin.

When the family were evicted, the key worker informed them he was no longer appointed to their case and they were left without information, support or a bed for the night.

In this case it was a link between other residents in the hotel and outside community support groups that enabled the family to get help and stage a sleep-out outside the hotel in protest of their treatment, as well as advocate with the family in Dublin City Council to secure alternative accommodation.

A similar case followed when Lynam’s Hotel based on O’Connell street went into receivership. NAMA and Grant Thornton, the receivers appointed to the building stated that it had to close and would be re-sold, again leaving homeless families who were living there in limbo.

As one resident recalls, support groups and collective action was the most effective way they could protect their families :

“I was told to find alternative accommodation by DCC due to refurbishments, later to be told the hotel was in receivership. I contacted the Irish Housing Network for guidance and support as there was none offered by DCC. We then decided to have a meeting with all the families currently at Lynam’s to discuss what options we had and what we could to do to find alternative accommodation.”

“After numerous meetings at Park Gate St homeless services and Dublin City Council the families decided action needed to be taken before we ended up on the streets with our children. We set a list of simple demands that included having facilities in our accommodation like cooking and laundry facilities.”

Pressure was applied to NAMA to use this hotel – not for more private development – but as opportunity to exercise its social responsibility clause and hand it over to the Government for the provision of housing.

Families staged a sit-in in Grant Thornton offices and a march to NAMA headquarters, and when the date to leave came, the receiver was offering deals between council and residents, rather than face a stand-off that would see him held responsible for the eviction of homeless families.

The stories above are just a glimpse of a struggle which almost every community in Ireland has witnessed.

There are many more examples such as the successful defence of a family evicted from Catherines’ Gate, Dublin 8 in December, 2015, who were evicted by private management when they were 20c short of making up a gas bill and assaulted when they complained.

Months later, people living in the Bru Hostel successfully resisted its closure on the grounds that the loss of 101 beds for homeless individuals, at a time when more and more people were being left with nowhere to go, would very likely result in deaths.

One of the women living in the Bru, and influential in keeping it open through a sit-in and march on Dublin City Council, Carrie Hennessey, would later be one of the key figures of the Apollo House occupation.

Many people who experienced the direct provision system and occupied a centre in Cork in 2010 in protest of the racist treatment and prison-like conditions they endured there also lent their support to Apollo House.

Dignity, empowerment and care were the messages constantly pushed by people living and volunteering inside Apollo.

Taken as both a process and a demand, they cut through the Government’s current attitude that the housing crisis is an administrative difficulty they inherited and are now struggling to resolve.

It is no mystery that a lack of tenants’ rights, social housing and community services are forcing families to sleep in their cars and people to sleep and die in doorways for lack of a home.

The more we can support and empower the voices of people affected by the crisis, the more we can build strong solidarity to ensure the suffering and abuse witnessed in previous years never happens again.