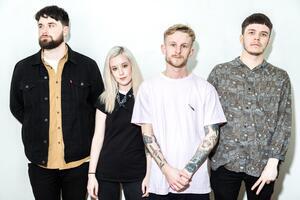 01. Post-hardcore, indie, emo, and so forth: signifiers seem to make less difference to Tipp outfit The Winter Passing and their pristine pop as time goes on.

02. Having paid their dues over the past five years with endless Irish and UK touring, solo and in support of touring acts, the band last year released their debut album A Different Space of Mind.

03. Streaming above is the band’s new single, Significance, coming from the band’s upcoming E.P. Double Exposure, releasing through Big Scary Monsters in the U.K. in April.

04. Says guitarist Rob Flynn to DIY Magazine on the E.P.:

”This record is a lot more personal than any of our previous work. The songs touch on mental health and well-being themes, a central point being the anxiety caused by stability and instability in your life and dealing with your ability to ‘be ok’. This time the writing is more personal to each of us individually, and from a new stand-point in each other’s lives in comparison to ‘A Different Space of Mind’.”

Thoughts: Strident yet sensitive. Inspiring in its honesty, The Winter Passing’s perseverance is reaping its just reward.

3 thoughts on “You May Like This: The Winter Passing”