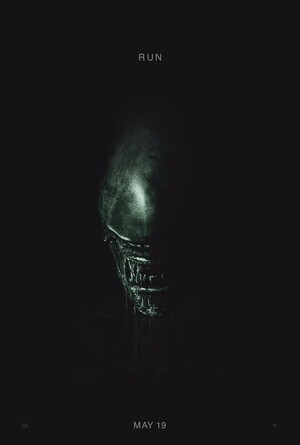 2. Prometheus (2012) was ambitious and very well made, but spoiled by a few too many plot points and lots of unanswered questions; Covenant looks like it wants to answer some of those questions. Hopefully it doesn’t throw up a load more.

3. Another thing Prometheus arguably got wrong was the absence of the actual Alien; probably why it didn’t use the moniker. This movie clearly aims to make up for that with Alien and Facehugger carnage dialled up to eleven.

“The crew of the colony ship Covenant, bound for a remote planet on the far side of the galaxy, discovers what they think is an uncharted paradise, but is actually a dark, dangerous world. When they uncover a threat beyond their imagination, they must attempt a harrowing escape.”

5. You can guess the above, but there looks to be more going on. Fassbender’s presence is wisely unelaborated-on; it’s safe to assume he’s an android, the same type last seen as David’s talking lopped-off head, escaping from the Engineers to go and find their homeworld and do…something. (It was a baffling movie really). He’s credited on wiki as Walter/David so let’s leave it at that for now.

7. In Greek mythology, Prometheus was the creator of human life. A Covenant, meanwhile, is a formal agreement with God. What we might glean from this is David/Walter is aware of the trap the crew is walking into, while they have no idea he is an android – just like Ian Holm’s character in the 1979 original. But who is God in that case? The Company? Peter Weyland? Then there’s the Adam + Eve connotations we can take from the crew of couples travelling to what they believe to be paradise.

8. It wouldn’t be the first time the series has invested in religious symbolism. Let’s once again take the opportunity to point out David Fincher’s Alien3 (1992) is a massively underrated film and I will fight anyone who says different.

9. That said, it’s also possible we’re looking too much into a film essentially about loads of people getting killed by monsters, but these elements don’t make their way into films by accident.

10. Lots to intrigue and satisfy fans in this trailer; it really didn’t need that last shot. Kind of overkill, like LOOK LOOK THERE’S PROPER ALIENS THIS TIME AND THEY DO COOL STUFF OK PLEASE WATCH IT.