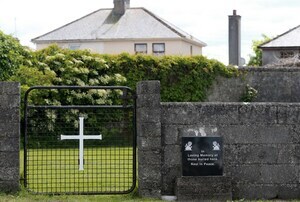 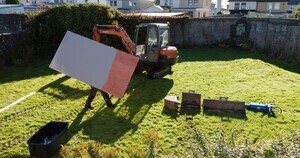 BREAK: Disturbing discovery by the Mother and Baby Homes Commission on the Tuam site @KZapponeTD to comment shortly pic.twitter.com/LzMv2ibdjK 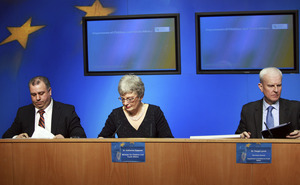 “This is very sad and disturbing news. It was not unexpected as there were claims about human remains on the site over the last number of years. Up to now we had rumours. Now we have confirmation that the remains are there, and that they date back to the time of the Mother and Baby Home, which operated in Tuam from 1925 to 1961.”

Katherine Zappone (above centre), Minister for Children and Youth Affairs, this morning. 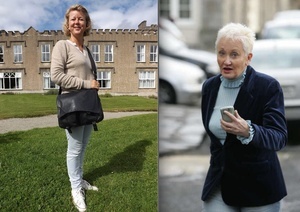 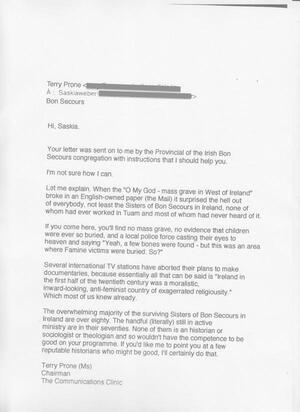 Sean O’Rourke: “I think, Terry Prone, I see something here from the Journal, you were saying previously, or was it quoting the Sisters of Bon Secours, saying they wouldn’t find a mass grave, or anything like that. What’s your response?”

Terry Prone: “No, no, no. This was – first of all, I don’t speak for the Sisters of Bon Secours, my company deals with the Sisters. But what is important about this is, nobody expected the kind of numbers that are being revealed today, clearly there was extensive burial,
I’m fascinated by the Commission’s use of the term in this way, because it makes it sound like there was a disrespectful mass-burial, rather than proper burial, which, I don’t know what to make of that. I think the questions that are going to be asked in the next while are, how many children, and what was the number of children, because this wasn’t a Famine burial, like the local people tend to talk about. This was between the thirties and the sixties, which would be in the time the home operated. How many children and toddlers were there, and is that disproportionate to the amount of children that were dying in the general population at this time. And the other thing [hushed tones] – what did they die of? Was it malnutrition, was it lack of care, what was it that killed the children?”

O’Rourke: “I’m still trying to process this myself. There was a request from documentary makers from France2 to the Sisters of Bon Secours asking for access, and the response from you was that there would be no mass burials to be found on the grounds, only bones where Famine victims were buried. It looks like there’s a bit more to it than that now.”

Prone: “It looks like there’s a whole lot more to it.” 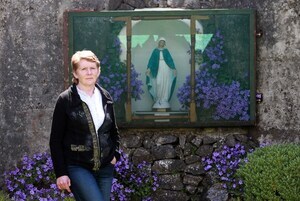 #tuambabies story by @rositaboland in our view is accurate & fair account from Tuam on aspects of a traumatic story http://t.co/imILAJlTWa

“The Survivor Community is not shocked by the latest news that hundreds of bodies of babies and children have been “discovered” at the site of the former Mother and Baby home at Tuam. This is something we have known for many years.

What is shocking is that once again we have to learn of this news via the media. The communications skills of the Minister and the Commission of Inquiry leave a lot to be desired when it comes to informing the Survivor Community of developments.

Tuam must not be seen in isolation. It was the fifth biggest of the 9 so called “Mother and Baby Homes” and it is the tip of the iceberg for deaths which amount to at least 6,000 babies and children across the 9 homes.

There are over 227 confirmed deaths in the notorious Bethany Home in Dublin and recent research has revealed the names of over 200 babies and children buried in the Angel’s Plot at Castlepollard Mother and Baby home ranging from a few hours old to over 2 years.

The worst is yet to come as details of the huge behemoths of Saint Patrick’s, Bessboro and Sean Ross Abbey have yet to be revealed but it is likely that the total for these three “homes” alone will be well over 4,000 babies and children buried in shoeboxes and rags.

Our Community is divided about the issue of excavations and exhumations. Many are adamant that all the babies must be exhumed, identified and given proper burials.

Others feel strongly that our former crib mates should be allowed to Rest In Peace. There are no easy answers and some survivors will be horrified no matter what happens. Mutual respect and understanding must guide our community.

The Government, Minister Zappone and the Inquiry must consider living survivors and their needs before any further excavations are pursued behind our backs.

Our community is ageing and has been viciously cut in two by the current official policy of excluding many survivors from the Inquiry.

Survivors need to be heard instead of ignored; consulted instead of insulted; treated with respect instead of learning the latest developments via the media.

May our crib mates in all the Mother and Baby homes and Holding Centers, Rest In Peace.”

Woulfe At The Door