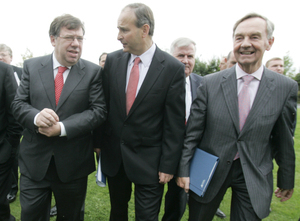 The June 2002 deal between Fianna Fáil and 18 religious orders, brokered by Michael Woods while serving as Minister for Education, awarded indemnity against all legal claims if the orders paid €128m in cash and property.

The agreement was made by Mr Woods, a devout Catholic, on behalf of Fianna Fail, before the 2002 General Election and cabinet approval was never sought. It was also never run past the Attorney General of the day [Michael McDowell].

On this morning’s Today with Sean O’Rourke on RTÉ Radio One, Fianna Fáil leader Micheál Martín was asked about the deal.

Seán O’Rourke: “Should the Government now, given what was revealed in Tuam, revisit the deal that was done in 2002 between the church and the then Fianna Fáil government? You were part of it. There was the minister [for justice], Michael Woods giving the religious orders a €128million or 128million pound/punt indemnity. And, since then, the State has paid €1.5billion in restitution for the abuse. I’m not sure if the €128million, such as it was, has actually ever been delivered?”

Micheál Martín: “Well, first of all, there’s two elements of that. There’s the payments to victims of industrial schools at the time. And the redress board that was established – that would have had to be established irrespective of any deal with the church, Sean. The church would never had been coming up with €1.5billion and the legal advice at the time, and I remember speaking to the late Rory Brady who was the Attorney General [Editor’s note: Mr Brady was appointed Attorney General after the indemnity deal was struck], he was adamant that the State would always, because of its involvement, from the inspectorial regime at the time in industrial schools – it was culpable. And so the choice was: does one, would you leave the victims waiting and those who were in, the survivors, sorry, of industrial schools, would you leave them waiting or would you allow them have to go through the courts for years to get their justified compensation. Or would you do…”

Martin: “No I’m saying it was the most humane thing that could have been done in terms of the redress scheme. In terms of the Church in my view a better deal could be done. and, for example, I think all the hospitals in the state should be given over by the churches to the state. I think the state has invested hugely in them anyway but I think issues like that could occur but in terms of actual pure cash I don’t think you were ever going to get to a situation the where the church would be coming up with the  1.5 billion. I would respectfully suggest the state was culpable, we were told the state was culpable. Demonstrably so. The state inspected these schools.”

O Rourke: “Of course the church is not neatly identifiable entity. it has different if you like manifestations a lot of which are independent of one another. Dioceses are different from religious orders…so how do you actually tie it all down?”

Martin” Well I think you engage with all the various orders one by one, you engage with those who have particular responsibilities, some more than others it has to be said. And of course religious orders are very much in decline in terms of nuns and brothers and that who would have been running industrial schools way back then and indeed the mother and baby homes..there’s a limit to what actually can be achieved in this field if one is honest, But on the other hand, there’s properties and land. and so on like that which should be there for the common good. The orders have responded in that regard by the way in relation to the provision of some services in health and education…”

O’Rourke: “…and a plan for social housing has been provided aswell. This idea that you have with the hospitals. The ones that would be obvious and immediately come to mind would be some of the big ones in Dublin like St Vincent’s, The Mater are you saying they should be handed over effectively to the state?”

Martin: “I do actually.And given now the state is now funding all of these hospitals my own view is that it’s time if there any properties still retained by the church they should hand them over.”

O’Rourke: “And without any religious if you will lingering influence in regard to ethical committees and things of that nature?”

Martin: “There are ethical committees that owe more to medicine than religious ethos and in my view that should always be the preeminent.”

O’Rourke: “And is this your alternative to re-opening the Michael Woods deal?”

Martin: “Well when you say re-open…I think we need to cut to chase fairly quickly here and that’s why I made that particular suggestion as an example of what could be done.”

Previous: Indemnity And The Religious

23 thoughts on “Spotting The Woods For The Trees”