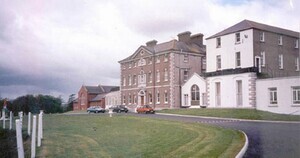 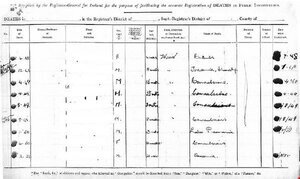 From top: Bessborough House in Blackrock, Cork; a page from the  death register of the Sisters of the Sacred Hearts of Jesus and Mary, the order which ran Bessborough

You may recall a special investigation by Conall Ó Fátharta, of the Irish Examiner, published in June 2015.

Mr Ó Fátharta also reported that, in 2013, the Department of Health was told by the Adoption Authority of Ireland that one adoption agency, St Patrick’s Guild, had “several hundred” illegal birth registrations on its books.

The agency holds 13,500 adoption files — one quarter of all adoption files in the country. The AAI speculated that the number of illegal adoptions may run into thousands.

These findings were not published by the McAleese Inquiry when it was published in February, 2013.

In addition, in November, 2015, Mr Ó Fátharta reported that the Sisters of the Sacred Hearts of Jesus and Mary order reported to the State that 353 babies died in Bessborough between March 31, 1938 and December 5, 1944, but its own register showed just 273 died – a shortfall of 80.

A report on the concerns of falsified certs is a front page story in The Irish Times this morning.

Readers may wish to read the following excerpt from the book Mother and Child: Maternity and Child Welfare in Dublin, 1922-60 by Dr Lynsey Earner-Byrne about events leading up to adoptions eventually being made legal in 1952.

[Alice] Litser [a general inspector with the Department of Local Government and Public Health]. was perhaps the most vocal advocate of legal adoption within government circles. Aware of the social condemnation of unmarried mothers and the reality of institutional care, she argued for legal adoption as early as 1937, when she noted that the ‘passing of such an act in Saorstát would do much in my opinion to give security and the chance of a happy life to many unfortunate children’.

She was unable to understand the religious objections to a legal adoption act, as the informal method of adoption that existed in the county was ‘open to many possibilities of abuse’, and there were frequently no safeguards to ensure that the religion of a child was respected after adoption.

In December 1939, Litster met with the Principal Officer of the Department of Justice, Mr JE Duff, in an attempt to convince him of the need for legal adoption in Ireland. During this meeting, Mr Duff explained that the principal objections were religious: ‘an unmarried mother might consent to the adoption of her child by persons or societies of different religion’.

In 1945 the Department of Justice approached [Catholic Primate of Ireland and Archbishop of Dublin John Charles McQuaid, from 1940 to 1972] McQuaid concerning the issue of legal adoption, and the Archbishop indicated that he did not consider it possible to legalise adoption and protect the religious faith of legitimate children.

The department ‘deduced from the general tone of his reply that he was not in favour of any legislation on the subject’, and the Minister ‘decided to drop the full adoption proposals’. This reluctance on the part of the Archbishop to have informal arrangements legalised was in keeping with his general policy in relation to issues of health, welfare and morality.

McQuaid was wary of secular legislation that would not bend if necessary to ensure Catholic welfare was paramount. Moreover, as the state had repeatedly expressed the desire for the clergy to ‘shoulder’ the responsibility of unmarried mothers, it was hardly surprising that the department agreed to let the matter of adoption drop.

There is evidence that many of the Catholic voluntary agencies working on behalf of illegitimate children were in favour of legal adoption. In the early years of the Emergency, the Saint Patrick’s Guild undertook an examination of foster care in Ireland and discovered that there was a shortage of foster homes as a result of wartime conditions. The guild declared itself in favour of some form of legal adoption.

…The Adoption Society, a pressure group in favour of legal adoption, began to lobby local authorities for their support in 1948, by pointing out the benefits of legal adoption in terms of costs and lives…

…McQuaid was not opposed to legal adoption in principle. He was aware of private adoptions arranged in his diocese by societies such as the Catholic Protection and Rescue Society, and he played a significant role in supervising the adoption of Irish children by American couples.

...the Adoption Society continued to pursue the aim of legal adoption, principally on behalf of adoptive parents and illegitimate children. In November 1951, the Society introduced a private members bill and officially approached the Catholic hierarchy through Cardinal D’Alton of Armagh.

In January 1951, the Catholic hierarchy agreed in principle to legal adoption, that provided there were sufficient spiritual safeguards to ensure that the religious faith of the child was protected. The episcopal committee drew up certain safeguards allowing for the creation of an adoption board, with a member of each religious denomination represented who had the right to refuse any application for adoption. All these stipulations were honoured in the Adoption Act of 1952.

Readers may wish to note that in a piece on his research, on Saturday, Mr Ó Fátharta wrote:

More than one government minister has said, on record, that every adoption carried out by the State since 1952 was done in line with the legislation of the day.

If that level of certainty exists at official levels, then why not open the files, let everyone see them and, for once, have this country do the right thing?

From the book Mother and Child: Maternity and child welfare in Dublin, 1922-1960 by Dr Lindsey Earner-Byrne

SPECIAL INVESTIGATION: Fears over ‘trafficking’ of children to the US (Conall Ó Fátharta, Irish Examiner, June 3, 2015)

Who Do You Think You Are?

Putting It Out To Tinder

2 thoughts on “Open The Files”