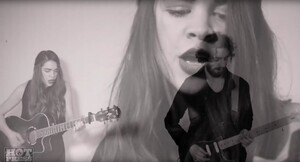 Susan O’Neill, operating as SON with a live acoustic version of ‘Exit’ from U2’s The Joshua Tree.

On Friday morning I sent Bono an email with a link to Susan;s video , which was filmed by Rowan Stokes in the Hot Press offices to mark the 30th anniversary of ‘The Joshua Tree’.I included Susan O Neill’s contact details, but didn’t bother mentioning to her that I’d sent it.

U2 are currently in New York, recording and rehearsing for their forthcoming album and tour, and I figured he’d probably be far too busy to be checking his inbox….

…Yesterday afternoon, he sent a really lovely message to “black eyed Susan”, telling her that her version of his song “took me aback in its simplicity and power… stark and still until it wasn’t.”

He went on to say that it was “great unfucked up work on a fucked up song,” before signing off with, “Your fan, Bono.”

The Joshua Tree 30 Years On: How U2 Conquered The World In The New Issue Of Hot Press (Hot Press)

3 thoughts on “Shaking The Tree”