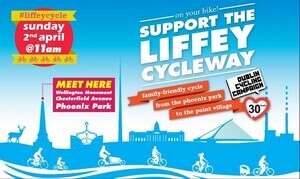 As the proposed Liffey Cycleway is currently being debated by Dublin City Council.

The Dublin Cycling Campaign is hosting a family-friendly, social cycle in support of the Liffey Cycleway this Sunday, April 2.

The cycle will begin at 11am at the Wellington Monument in the Phoenix Park and will follow the proposed route of the Liffey Cycleway along the North Quays as far as the Point Village.

The proposed Liffey Cycleway is a segregated two-way cycle path which will run along Dublin’s North Quays.

The 4.6km path will provide a safe and accessible cycle route from the Phoenix Park all the way to the Point Village.

Such a facility would open up cycling to people of all ages and abilities, especially those who would like to cycle but are too intimidated by the current traffic conditions.

Previously: An In Depth Look At The Liffey Cycle Plan (IrishCycle)

23 thoughts on “Cycling This Sunday?”