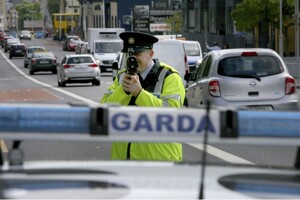 Frilly Keane is back with her calculator: crunching the numbers behind the Garda’s dodgy statistics.

Before ye go any further, in the service of transparency and disclosure, I’m one of the 14,700 driving offenders that haven’t been processed, or caught up with, or witnessed by Paddy O’Gorman.

The offence, since there was no denying the figure displayed on the hairdryer, happened last June, on the Waherfurd end of the M9, with full NeeNaws n’Blue Lights.

And it wasn’t the first time I’ve been done in that vicinity. NeeNaws then too. But the Guard himself was daycent enough, and promised it would be just Speeding and not Dangerous Driving, so I sucked it up and waited.

A reader (and I’ve no doubt) might say that since I’ve my fixed fine still in the póca, and my insurance renewed by the way of a “Not yet” to the “any penalty points or driving convictions?” that I’ve little ta shyte talk about; but believe me I am going all out anyway.

“The Mission of An Garda Síochána is Working with Communities to Protect and Serve.”

That’s what is says on their website; followed by their core “functions”- one of which is:

Well mannered hashtagging millennials might twerk ‘Epic Fail guys.’ But I’m more of a traditionalist, so tis a my hole ye are.

But it’s too easy and too widespread to call them names or pick on Noirin, although she’s no innocent. So I’m returning to my home ground and using numbers to tell ye we are not safe while An Garda Síochána remain the owners of the upholding-of-the-law gig.

Fairs fair, a good slice of the 14,700 cases of points not pressed onto licenses is for 60 in the 50 zone type’a carry-on; so the world won’t end. And the presence of the squad car and the camera van does put manners on ya when you’re belting down to Thurles.

But I want to go back to the numbers, and present them as Management Information, the kinda stuff Execs, Decision Makers and Business Owners get monthly from their finance departments, cost accountants aka bean counters, and maybe just from their own internal operation systems.

€1,176,000.00 (80 yoyos x 14,700) of Potential Income to the State, was not collected in a timely manner, and the admin chore of allocating the required Penalty Points remains outstanding.

Now that we’re talking about manpower hours; and I’ll use my own case to line it out.

Single Garda manned patrol car trapped me, followed me, stopped me; say 5 minutes, took details and had a bitta chat say 10 more minutes, updated his book and recorded the offence etc., say another 5 minutes, and returned back to his hiding place under the flyover, say another 5 minutes. Plus Diesel and Wear and Tear. Maybe he stopped for a fag. I dunno, but I’m allocating 30 minutes direct labour to my case.

Imagine an additional 7 thousand teaching hours or Nursing Hours …. Or even the impact a tenth of those available hours would have on our Elective Surgery Waiting Lists

Now I can’t provide the hourly rate at the full Employer cost, so I can’t reliably put a €value to it; but for the purposes of this gig I’m going to post a value of €300k, and 50% of that again to getting the Penalty Points allocated.

450 thousand grand; and in my experience – I’ve seriously undervalued this.

Did anyone notice they weren’t getting value for money for these high cost hours? In industry you would have to do timesheets, and even in the HSE there are CaseMix returns.

Were the People Managers from Sergeant up to Commissioner not getting their monthly/ quarterly reports from Finance. If not, why not?

But if they were and they didn’t act on this wastage; by fúck I’d have them out the door; if t’was Bus Drivers or Train Drivers they’d be long gone.

So, so far, with this quick tot up, the Gardai owe the taxpayer circa 7 thousand labour hours and €1,176,000.00; if I owed the ESB or my LPT they’d garnish my wages; wouldn’t it be great to garnish that 1.176 million and stitch those 7 thousand hours into days taken in lieu.

And I’m only half way.

Did the readers of these management reports not cop that circa 48% of the driving population in the State had possibly been breathalyzed?

And you don’t even have ta have Micheal O’Leary skill levels be able to interpret that data handily enough; like if 301 was entered by mistake for 103, the data back would say to the reader that there was an additional 198 breathaliser tests in a shift.

‘That’s some funeral they were waiting outside’ – a well fed Senior might’a thought.

That Senior might also have thought ‘Jay’s we’re getting fierce value those breathaliser hoses’ since the purchases didn’t match the usage data, in fact they were so far apart you could march a Water Protest thru’ them.

But even if they didn’t extract that from their own management accounts for themselves; the vendors of the devices actually told them the Stats they were reporting didn’t tally.

The impact on the likes of you and me is that the 539 Inspector rank and up Gardai had information that suggested that 48% of the cars on the road were stopped on suspicion of Drink being taken.

Beyond the ould’ reliable Christmas Clampdown, what did 539 Senior Gardai do about it? Fúcking nathin’.

They had data that said our roads were not safe and they ignored it. They turned their arses to one of their core missions “reducing the incidence of fatal and serious injuries on our roads and improving road safety.” That’s a non-financial cost btw.

So back to the manpower numbers; 1 million breathalyzers: let’s say 20 minutes for each case, from observing to testing and filling out the book etc. That’s 333,333 Direct Labour hours that is now unaccounted for. But paid for, and pension contributed for, and some of it over-time levied and bonused for.

Thirteen and a half million worth of labour and nothing produced.

Plus the 450k from the Fixed Penalty cuntology.

1 in 3 road deaths is caused by Speeding, 1 in 3 by Drink Driving; that’s two thirds of the road fatalities in the State right there, and the Garda Managers don’t even give it their attention or even wonder what value for money they’re getting from the 10,355 Gardai and their 1956 Garda Sergeants.

I don’t blame the lads on the road and at infantry level. They know no better, this is how they were groomed.

Noreen is just biding her time and the Fianna Gael Entente are cooperating with her by lay’veing her be; sur’ isn’t she’s doing them a favour staying on ‘till they Head Hunt the Lad they wanted in the first place.

Then it’s off with the Lumpsum that could buy ya a 4 bed detached in Wicklow and a 6 figure pension for Life.

If a Traveller owned even a 100th of that 14 million, CAB would be up his hole till they got it out’ve him. If someone in Dunnes or a Contract Cleaner in a Hospital gets overpaid today, their wages next week will get stopped.

Noirin and her 54 co-horts there will not be asked to find that 14+ million from their annual allocation. They won’t even be made tell us what really happened

Protect & Serve themselves. That’s their Mission.

And don’t let them convince you of anything else.

15 thoughts on “To Protect And Serve”