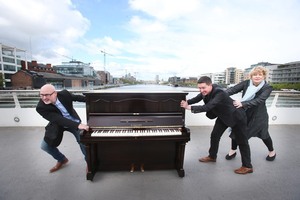 The musical officially launched today ahead of its summer season at the theatrefrom July 18-30.