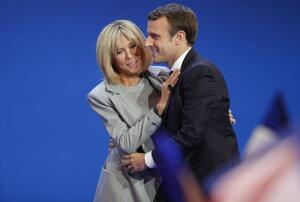 Who is Emmanuelle Macron and what does he want?

Growing up, the French name Emmanuelle, in its feminine form, was synonymous with what, euphemistically, were described as ‘art house’ movies. Along with enthusiastic co-conspirators, we would seek optimal back row positions at our local cineplex. There were occasional glances at the flickering screen, but most of the time we engaged in whispered, intensive, discussions on all matters French.

These days it is a male Emmanuel who seeking to seduce the French electorate. Most media attention has been directed towards his unusual significant relationship. Given the sad, superficial nature of most global political analysis, these days, this should be the least important thing about him.

It’s as if politics anywhere has ceased to be a battle of ideas, being reduced instead to being a battle of narratives.

Little seems to be known about Monsieur Macron, other than the fact that he isn’t Lucifer herself. If that all that he represents is being the ‘business as usual’ candidate, then the ‘it can’t be any worse’ brigade will further strengthen in France and elsewhere.

And that is to presume he will be elected, which too many of us are presuming. I worry that too many of his opponents have moved immediately to endorse him. As have many EU leaders, including our own Prince of Depth, An Taoiseach.

Regarding this second category, there should be considerable disquiet in France. It represents an intolerable intrusion into a political process, which remains only half complete.

The reluctance of the Left candidate, Melenchon, to join the Macron chorus, could be more beneficial to his eventual election, than any number of premature, and often unwelcome, endorsements. It introduces a note of uncertainty into the second round of voting, that can help maintain turnout.

Given the similarities of their respective platforms, other than on immigration, and their appeal to similar parts of the electorate, it shouldn’t be a surprise if many Melenchon supporters decide to vote for Le Pen in the second round.

The onus is on Macron to define what type of reform he is interested in bringing about. If it is only about a ‘deeper’ Europe, then he need not bother.

If the European Union wants to secure its future, it needs to freeze any thought of deepening the European project, devoting its energies instead towards addressing inequality.

After Brexit and Trump, sanity seems to be making a coming back, with the far right failing to achieve in Austria and The Netherlands. However the very definition of insanity is doing the same thing over and over again and expecting a different result.

The only way of bringing about change is to do things differently. Such change has to be the right change, for the right reasons. Never change towards and for the far right.